So Much Depends On The Cut Of A Man's Moustache 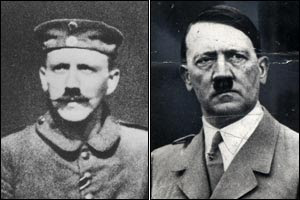 ...because if Hitler had kept it as per his original style, Germans would have just giggled at him instead of being entranced by his fiery rhetoric and following him into the nightmare of History.

THE nightmare of history has to be communism.

the nazis were rank amateurs when it comes to mass murder, multiple genocides, human suffering etyc.

On paranoids make linkages like that, you psychotic anonymous commenter.

Direct quote from Hitler himself?

"We are socialists, we are enemies of today's capitalistic economic system for the exploitation of the economically weak, with its unfair salaries, with its unseemly evaluation of a human being according to wealth and property instead of responsibility and performance, and we are all determined to destroy this system under all conditions"

The Nazi's were green. Here's a quote which may sound very familiar -- at least in part. "We recognise that separating humanity from nature, from the whole of life, leads to humankind's own destruction and to the death of nations. "Only through a re-integration of humanity into the whole of nature can our people be made stronger . .
"This striving toward connectedness with the totality of life, with nature itself, a nature into which we are born, this is the deepest meaning and the true essence of National Socialist thought."
That was Ernst Lehmann, a leading biologist under the Nazi regime, in 1934, and he wasn't alone. Hitler, for one, was an avid vegetarian and green, addicted to homoepathic cures. His regime sponsored the creation of organic farming, and SS leader Heinrich Himmler even grew herbs on his own organic farm with which to treat his beloved troops.
HITLER also banned medical experiments on animals, but not, as we know to our grief, on Jewish children. And he created many national parks, particularly for Germany's "sacred" forests.
This isn't a coincidence. The Nazis drew heavily on a romantic, anti-science, nature worshipping, communal and anti-capitalist movement that tied German identity to German forests. In fact, Professor Raymond Dominick notes in his book, The Environmental Movement in Germany, two-thirds of the members of Germany's main nature clubs had joined the Nazi Party by 1939, compared with just 10 per cent of all men.

The word "Nazi" is a German abbreviation of the name of Hitler's political party -- the nationalsozialistische Deutsche Arbeiter Partei. In English this translates to "The National Socialist German Worker's Party". So Hitler was a socialist and a champion of the workers -- or at least he identified himself as such and campaigned as such.

And modern "progressives" attempt to claim the "fascists" were right-wing. They were right of the Communists in the day, but much to the left of cons and even most liberals . . . back in the day.

Oh boy, you've got some real 'sicko' responses here. This is disturbing.

Interesting that Hitler historically was considered a right-wing conservative-fascist, as was Mussolini.

One must remember that Hitler was insane and a quote here or there means diddly.

I am disappointed that more of these comments were not moustache or at least hair related.

interesting how some folks can't accept communism murdered hundreds of times more humans, caused more suffering, chaos and environmental disasters than the nazis . . . all in the name of socialism.


Cognitive dissonance of the liberal mind to still admire socialism.

interesting how some folks can't accept communism murdered hundreds of times more humans, caused more suffering, chaos and environmental disasters than the nazis . . . all in the name of socialism.

That's because *us folks* aren't drooling rednecks and understand the difference between nazism, fascism, communism, socialism and totalitarianism.

People who don't vote for Stephen Harper...that's my impression, anyway.

So Hitler was a socialist and a champion of the workers -- or at least he identified himself as such and campaigned as such.

A little knowledge is a dangerous thing, and there's your proof.

Hitler never identified or campaigned as a socialist, in fact he virulently hated the left. The first inmates in Germany's concentration camps were Social Democrats and Communists -who together actually outpolled the Nazis in the 1932 elections, and did so overwhelmingly on the strength of their support from working class Germans. Furthermore it would plainly be absurd to suggest that the policies Hitler actually pursued in power had even the remotest trace of socialist thinking. Finally, Hitler justified the invasion of the Soviet Union largely on the basis of the need to rid the world of the menace of Bolshevism.

Like so many right wing idealogues you have absorbed just enough learning to confirm your shallow and unexamined prejudices oldschool. If you ever decide to ditch the cheap rhetorical talking points in favor of genuine learning you could start by reading Richard J. Evans' The Coming of the Third Reich, which will remain the standard work on the subject for a number of years to come (Toland? WTF?? Was The Rise and Fall of the Third Reich already signed out at the library?)

And stop reading the ignoramuses who populate the opinion pages of your local CanWest / Quebecor newspaper offering. Their stupidity is obviously contageous.

Hitler sure could have used a "primper" and psychic.

Turns out that Hitler HAD a psychic.

My, my, talk about linkages...

It's getting hard to discuss Harper & friends at all without violating Godwin's Law.

Communism is a death sentence. Socialism is merely Life imprisonment.

Calling Hitler a right wing conservative fascist doesn't change the facts of what he did. And the tactics he used parallel those which socialists and liberals use today.

And the tactics he used parallel those which socialists and liberals use today.

From the mouths of retards.

I think body count should be an output measure of Hitlerianism. I think George Bush, with a BC in the hundreds of thousands, is the current leader. Harper's got a few corpses to his credit as well, so he's one to watch.

Gabriel Henley said...
This comment has been removed by the author.
2:24 AM