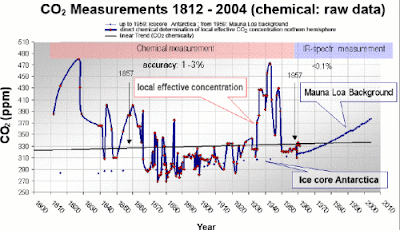 Climate Change denier Ernst Beck is best known for producing the graph of historical CO2 levels shown above, which he has used to (yet again) totally disprove the AGW thesis. The graph shows:

...that there were huge fluctuations in CO2 that ended by some strange coincidence exactly when they started making more accurate measurements.

Therefore, sucks to the warmist crown.

Even more radically, the same techniques that Beck developed have been applied to the field of mathematics, and the results have been shocking. Here's the data set to which inestimable science guy Theo applied his technique, and here is what he found: 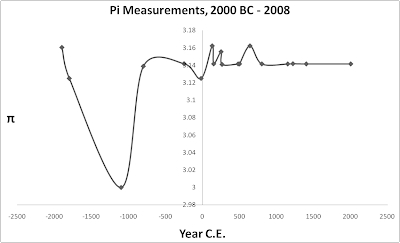 Yes! You're reading that right! The value of π (Pi) has fluctuated wildly over the past millenia! Which begs the question: is all of mathematics in the same boat? Maybe I didn't stink at numbers in highschool! Maybe their values were shifting even between the moment I wrote down my answers and the moment my teacher, that Jerk Mr. Glasscock, marked them!

Obviously, he had been taken in by The Great Math Swindle. And I suspect this hoax about mathematics being the exploration of unchanging, universal truthes was perpetrated by a bunch of goddamn Mathematical Platonists, with all the nonsense they write about eternal Forms floating out there in airy fairy la la land.

In fact, I suspect that James Hansen and the whole warmist crew are a bunch of goddamn Climate Platonists! Get with the program, dudes, climate is always changing!

Posted by bigcitylib at 9:17 AM

You're reading that right! The value of π (Pi) has fluctuated wildly over the past millenia!

Things like this are the only amusing bits to come of this dreary denial-a-palooza.

I see you are still enjoying this winter's blast of global warming?

How about them cooling oceans & troposphere ?

Must be the bad instrumentation messing up the data.

There you have it Suzuki-puppets, GW plateaued and temps have been coming down for 10 years now, and that wouldn't include this winters' bone chiller.

It's over you marxist wing nuts, find some other global catastrophe to rally your retarded followers.

Everyone pay attention. BCL is giving a lesson on global warming.
This guy knows his stuff. ;)

Anonymous said...
This comment has been removed by a blog administrator.
9:51 AM

Direct atmospheric CO2 measurements have been made since the early 1800s (1820? 1840?) but it's surprising that the IPCC never used that data in any of it's analysis. Hmm.

You've removed all doubt when people wonder if you're an idiot . . .

Is your Kyoto Kool-Aid flavoured with copper sulfate, lead or mercury?

Just stick to Arts, or Pottery, or History of Renaissance French Pottery, or whatever 'sociology' course you majored in. Math isn't for you touchy-feely types. You can't solve an equation by crying about it, and the answer isn't wrong because it hurts your feelings.

Woohoo! When confronted with evidence that the value of π is actually fluctuating wildly according to Beck's ground-breaking method, the "skeptics" (um, I mean "climate realists") simply respond by throwing out unrelated talking points.

Business as usual, nothing new here, move on.

In case either you or your dullard readers don't grasp the bleedin' obvious, the value of Pi has never changed. Pi represents the relationship between circumference and radius. What has changed is the representation of that conceptual number.

If you use a crappy methodology to measure something, and then a more accurate means comes along and shows different results in measuring the same physical phenomenon, it's not the physical entity that has changed, just the measurement of that entity.