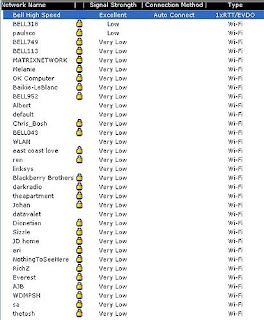 Mark Lemire is trying to figure out who visited the Neo-Nazi portal Stormfront on December 8, 2006 from IP address 70.48.181.203. As I have noted on several occasions, his theory is that CHRC operatives hacked the private wireless connection of an Ottawa resident living about 1,200 feet away though a block of downtown highrises and across a park, even though this is pretty much impossible without special gear.

Now Mark has provided a wireless scan from outside of the Ottawa's CHRC headquarters in Ottawa to bolster his case. It
...shows numerous unsecured wireless access points in range.
And so Mark asks:
How many others have been similarly targeted by the out of control Human Rights Commission?
But of course this is the wrong question. The right question is: why would anyone with so many unsecured hotspots in the immediate vicinity even attempt the Herculean task of hacking a private citizen's account 1/4 mile away? (And why, in any case, would they need to stay connected for a full 24 hours, as Stormfront records indicate?)
Honestly, I don't know what happened with 70.48.181.203, but since investigations of the 90sAREover posts indicate that Mark and his combüdor X-berts have managed to trace this visitor to a Rogers regional proxy handing traffic from (and masking the real IPs of) perhaps 10,000s of PCs, I'm not going to bother. Just file it under Nazi dumbness.

Posted by bigcitylib at 5:27 AM

Funny how the media reported this w/o any of the skepticism you have rightfully pointed out ie they are reporting it as fact rather than conjecture.