Has Western Separatist Leader Distanced Himself From Only Supporter?

Here's a screen cap of the WBTA's Executive Council from a couple of days ago: 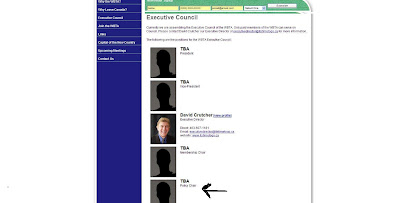 Now, Buckets has also been keeping tabs these guys, and recently spied out another possible WTBA Member: Erik Gregson, another long time Reformer and associate of both Crutcher and Craig Chandler. Erik has been tasked with chairing WBTA's January convention and, since his email is policy@itstimetogo.ca, Buckets logically concluded that Mr. Gregson was slated for the position of "Policy Chair" on the WTBA Executive Council (note arrow above).

But wait! At the latest version of the WTBA EC page ,the position of policy chair has been entirely eliminated!!! 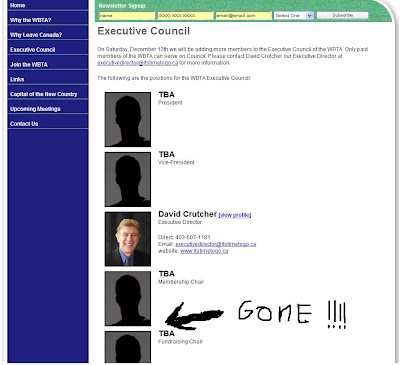 So are Crutcher and Gregson already on the outs? Has the nascent WBTA already begun to fragment along ideological lines--like who gets to be Supreme Commander on Tuesdays--or did they merely quarrel over who sits at the head of the official WTBA coffee table?

I'll be following this one closely in the days and weeks ahead.

As an aside, if you've ever wondered why these separatist groups tend to leave Manitoba out of their definition of The West, here is Mr. Crutcher on the topic:

Which division is the Winnipeg Blue Bombers in?

And these guys wanted a separate Alberta to have its own fleet of nuclear submarines.

Disregarding the mental retardation manifested in that statement, I wonder what was the final straw?

Possibly his experience as a former "club scout leader".

Club Scouts are real in Alberta. It's a painful coming of age ritual. The resulting brain injuries affect the membership for the rest of their lives, result in lapses such as not realizing that Alberta is land locked.

Perhaps the intent is for those nuclear submarines to patrol the tar sands' toxic lagoons?

Ti-Guy: Erik Gregson "lost belief" in Canada in 2005? Disregarding the mental retardation manifested in that statement, I wonder what was the final straw?

Question asked; question answered:Separatists on parade, 6: Erik Gregson comes out of the closet.

Ti-Guy: Erik Gregson "lost belief" in Canada in 2005? Disregarding the mental retardation manifested in that statement, I wonder what was the final straw?

Question asked; question answered:Separatists on parade, 6: Erik Gregson comes out of the closet.

Buckets, I assume the references to "coming out of the closet" are in regards to his Western Separatist leanings.

Umm, yes. Not that there's anything wrong with that other kind of coming out of the closet.

Thank you. So, Grewal and Stronach, eh? Yes, I remember that terrible time. A civil would have been a tea party in comparison.

In fairness to the clowns in question, I don't know of anything that links them to Mr. Hutton.

Looks like Glen is a fan of Mr. Doug Christie: