Who Will Be Mark Steyn's Witnesses?

Just noticed another piece on Steyn's website re the defamation case climatologist Mike Mann has brought against him.  Its largely the same old same old, but then there is this bit towards the end:

I have a great legal team headed by Dan Kornstein, the man behind the most consequential piece of free-speech legislation enacted this century, and we've been interviewing prominent scientific witnesses tired of the climate of fear that Mann and his Clime Syndicate have imposed on their field.

Be interesting to see who he finds who can pass muster as an expert witness.  We are talking a very, very short list of possibles.  Also, Steyn references a recent post by Steve McI at Climate Audit.

But, needless to say, Mann had nothing to do with the development of the instrumental temperature data showing 20th century temperature increases....

Mann’s (false) claim to have been “one of the first” to document 20th century temperature increase was apparently based on MBH98 and MBH99, which he described later in the pleadings (paragraph 15) as “two research papers showing a steady rise in surface temperature during the 20th Century and a steep increase in measured temperatures since the 1950s”. Needless to say, these papers showed 20th century temperature data in key graphics, but the papers themselves were obviously about the proxy reconstructions, not the instrumental record.

Well, note the qualifier "apparently".  Maybe the claim is not based on these two papers.  Maybe its based on this 1994 publication, for example, in which Mann and his co-author write thusly: 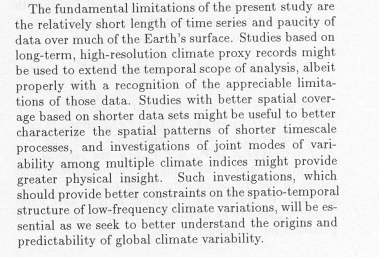 Or maybe not, but its clear that Mann's work from the early 1990s (pre hockey-stick graph) dealt with the instrumental record.   At least so says his wiki entry:

Mann then joined the Yale Department of Geology and Geophysics, obtaining an MPhil in geology and geophysics in 1993. His research focused on natural variability and climate oscillations. He worked with the seismologist Jeffrey Park, and their joint research adapted a statistical method developed for identifying seismological oscillations to find various periodicities in the instrumental temperature record, the longest being about 60 to 80 years.

So his claim seems sound.  Steyn is flailing.  And McI....god his stuff is boring these days.  He needs to find another hobby.

Posted by bigcitylib at 4:09 PM