Ever since Liberal strategist Warren Kinsella made a few questionable remarks about Chinese cuisine, the Tory brain trust has been trying to use the incident as a means of bolstering their support among the Chinese Canadian community. So they sent a couple of MPs to the Yang Sheng restaurant to present the owner with a bogus certificate and, generally, keep the pot stirring (no pun intended) for another news cycle. Here's a picture from the resulting photo-op, along with Ezra's account: 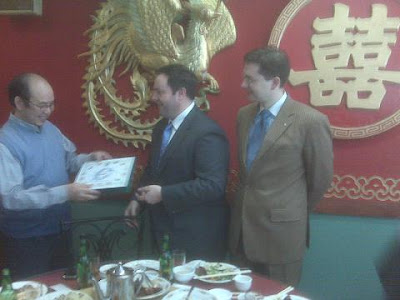 Jason Kenney, the Minister of Multiculturalism, Citizenship and Immigration, and Pierre Poilievre and Alice Wong [...] went for lunch today to the Yang Sheng restaurant [...] And Kenney gave Mr. Feng, the proprietor, a Certificate of Excellence. You can see a picture of Kenney giving the award to a beaming Mr. Feng. I bet it feels nice to be treated with some respect -- even some flattery -- after being dragged through Kinsella's muck for a week.

Good for Kenney and Poilievre (and Wong, not in the frame).
Now, Alice Wong has been the MP driving this particular mini-scandal, yet when the time comes to collect whatever political payoff might be derived from it, the Chinese Canadian MP is literally left out of the picture. Instead, Poilievre and Jason Kenney, whose only connection to the Chinese community appears to be that he has more chins than the Beijing phone book, get all the camera time.
PS. I made my peace with Warren a long time ago, and in "real life" he has provided some very solid advice to me on a number of occasions. Nevertheless I still get a bit of a giggle when he lands up in trouble. Don't know why. In any case, its bizarre that the Tories should build a political strategy around annoying one guy. 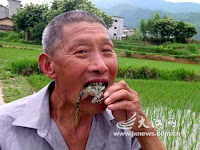 PPS. The real issue with Chinese cuisine is not the meat content of its entrees, but its rather sub-standard desserts. Here I think the attention to food texture, which gives such terrific results when applied to main courses, comes up short. A lotta bland, hard jello-type thingies ensue.

I don't get it. I hear off hand comments nearly every day about how horrible hagis is and yet no one is outraged at the savage attack on Scottish people.

Hagis is not bad. The Scots have to answer for the bagpipes.

Ezra lied so many time last week I'm astonished the stupid Conservatives would have wanted to focus on this so closely.

The Torids are still looking for any and all angles to split the 'ethnic' vote away from a historical Liberal home. The Canadian Chinese demographic is increasing by leaps and bounds and has financial influence that go into the Con-coffers. Those on the Left Coast most of all.

Scots are all over the political map. Some, with names like "Douglas" have proven...problematic to Conservative desires. Dry well for improved right-thinking electoral standing.

Kinsella's a thing they can't get around. He knows where too many bodies are. They want to smear him off so he sticks to Ignatieff.

You have to admire the Cons, they let no staged photo-op go unturned.

The Liberal Party depends critically on the immigrant vote, and Kinsella appears to be politically tone-deaf when it comes to dealing them.

That Kinsella took his time coming up with a decent apology - thus allowing the issue to fester - shows that political acumen is not his strong point.

Wouldn't be my pick for a political strategist.

Thanks for your "concern," Rabbit.

Get back to us when you've got something intelligent to say.

mauser98 said...
This comment has been removed by a blog administrator.
8:47 AM