You Figure It Out: Royal Society On Geo-Engineering 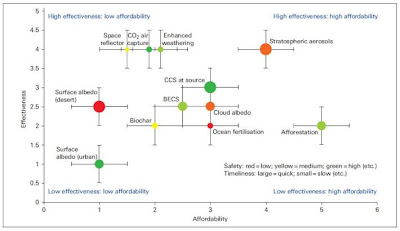 A phase space diagram plotting cost vs. effectiveness of the various methods of geo-engineering under consideration as means of averting AGW. From the Royal Society's report on the topic. Note that "air capture" (ie carbon capture from ambient air), Pielke Jr.'s hobbyhorse, works OK but costs alot, and of course Roger Jr. is not happy with that assessment. Further, he seems to suspect a plot against him and his ideas.
Note too that the cheapest and most effective scheme, pumping aerosols into the stratosphere, is a political no-go. Aerosols shot into the sky in one place come down as acid rain in another country. Oopsie.
h/t
PS. The title comes from the fact that the reporters covering this story apparently found the diagram above quite confusing.

Posted by bigcitylib at 9:25 AM

A post on AGW without a single use of the word "denier"? What's up BCL?

Pielke ought to defer holding strong opinions about the issue of air-capture.

I am no expert, or scientist, but his paper, linked at the blog post you linked to, likely isn't very useful. It isn't a paper about analysis of the costs of various air-capture technologies, which would be a magnum opus (and something useful), it instead promises to be an exercise to, in the end, constrast the Stern review's costs with air capture's costs while "(seeking) to
err on the side of conservatism, that is, over-estimating future
costs of air capture." In other other words taking the costs of air-capture, about which we still have little real data, but doing so apparently "conservatively", and contrasting them with many carefully evaluated and caveated (though still criticisable) costs from Stern for mitigating climate change.

The first part of the paper is larded up with verbiage that has nothing to do with air-capture, or what Pielke is trying to show with respect to costs. I think he included it to try to make the case that his proposed analysis is something that would naturally be suggested by prior work. I didn't come away at all convinced, although, again, I admit, I know little about the subject. (It read a bit like the padding I used to fill in my grade 9 essays to get them over 1000 words.)

This wouldn't be a pointless exercise if we had a good idea of the costs of air-capture, on the order of the certainty about costs from, say, crop failures due to drought, or even costs from replacing sources of carbon-dioxide coal plant with, say, a nuclear plant, or the cost of avoiding deforestation, or the cost of modifying a particular carbon-dioxide producing industrial process. But we do not (and maybe we cannot). Pielke in his paper claims:

"Making global cost estimates for any complex set of interrelated systems far into the future is a dubious enterprise. However, the analysis here shows that using very similar assumptions to the IPCC (2007) and Stern (2007), air capture compares favorably with the cost estimates for mitigation provided in those reports. The main reason for this surprising result, given that air capture has a relatively high cost per ton of carbon, is the long period for which no costs are incurred until the stabilization target is reached. Further, a factor not considered here (nor, apparently, in Stern or IPCC) is that the economy would likely grow at a higher rate than with early, aggressive mitigation, meaning that the costs of air capture would be a smaller fraction of future GDP than comparable costs per ton of C requiring large costs early in the century. The cost of air capture under the assumptions examined here is also less that (sic) the projected costs of unmitigated climate change over the 21st century, which Stern estimated to be from 5% to 20% of GDP annually and IPCC estimate to be 5% of global GDP by 2050."

Pielke's air capture assumptions are not likely similar to Stern's. The degree of dubiousness is different. Air capture doesn't exist, and may never exist, in which case we crash and burn. Stern considers known or likely means of mitigating climate change to 550 ppm, even with their wide uncertainties that lie in their scale and implementation (See chapter 10 of the Stern review).

We also do not know how cost would vary depending on how much any or all air-capture solutions were implemented (it could decrease, or it could increase). But answering those questions first is important, before criticising careful reviews like Stern's.

I think that Pielke's paper is premature, and cannot do what he wishes.