Wow That Was Quick!

The anonymous dude with the private basement war-room has already forged Stephen Harper's "Hidden Agenda Speech" into an attack ad:

Looks like the anonymous dude has managed to steal some half decent editing software, becau 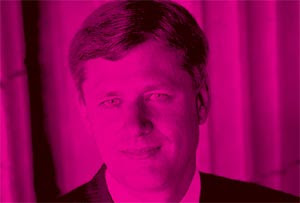 se the production values on this one are are definitely good enough for TIFF. But for me there's something missing. For me, any ad about Stephen Harper should include this portrait, in which his face is illuminated by the very flames of Hell itself, from which place he emerged so many years ago.
Get with it, anonymous dude.