[PPPO MPP Vic] Fedeli blamed wind power as a major culprit in driving up costs. Wind power is sometimes plentiful when demand is low, producing a gush of power when it’s least needed. That has occasionally forced the province to give away surplus power, or even pay some big industries and export customers to use it.

Now, "The Global Adjustment" mentioned in The Star piece is a charge that was added to Ontario electricity bills in 2005. Its been going up even while market rates have remained flat, so it's the main driver behind increases in energy bills over the past decade or so.  The graph below, from here, shows how each of the various power sources used in Ontario have contributed to it: 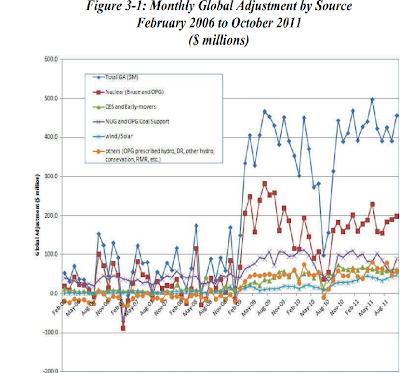 It looks better if you click on the image, but renewables (mostly wind and solar) are the blue line bouncing along the bottom. As of April 2012, the date on the Monitoring Report on the IESO-Administered Electricity Markets, they accounted for about six per cent of the adjustment (and therefore about three percent of your total bill), though that share was expected to increase over time.  Much of the adjustment, 45 per cent:

...is attributable to the Bruce Power and OPG nuclear units. The major factors that led to the increase in 2009 were a significant decrease in the wholesale electricity price and a higher regulated price paid to OPG, both of which increased the spread between the contract prices and the HOEP.

...which is to say that if you shut down the entire Ontario renewables sector your power bill would still be going up, though at an almost microscopically slower pace.

Hardly an occasion for the kind of outrage that Fideli and the various anti-wind groups profess to feel.

Your analysis of the impact of renewables on overall rates misses the big part about how intermittent renewables drive down HOEP. What this means is that renewables are the primary factor in fixed nuke costs transferring from HOEP to GA.