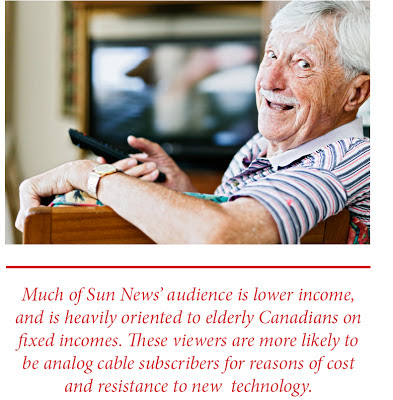 Ezra's audience will fit right in.

okay, so im guessing that zoomer is willing to finance this debacle and keep ezra:P Better hurry as their audience is dy...I mean suffering from a steady reduction.

They better have a good legal team.
Im also guessing the conservative ads will still float the station regardless of how unprofitable it is. I gotta wonder what their numbers are now, as they havent been a available for a few years.

Moses Znaimer ain't a stupid man. My guess is that he would try to reboot the channel as something different than it is right now, rather than keeping the same thing that isn't working.

Craig has it, I think.

From the Globe article:

Part of Sun News Network’s appeal is that it has a Category C broadcasting license, which means all TV distributors must offer the channel to customers, both on a standalone basis and in bundles of news channels, thanks to new rules set late last year by the Canadian Radio-television and Telecommunications Commission (CRTC).

I think that's what he's buying.

That's undoubtedly what he's buying but that doesn't mean anything will be of better quality or less conservative.

Friends got us to subscribe to Zoomer mag a few years ago. Dreadful crap. Moses columns are probably the crappiest. Judging by the mag it might be hard to tell the difference between the old and the new if the deal goes thru.

I would love for this to happen as I know how welcomed Moses is by the Boomer generation - he gives them/us a voice as most media focus on younger demo.

Oh, and to the mysterious Dana - NO, the Zoomer Magazine is NOT as you describe. Moses is a media mogul, who has changed the medium. I'm a HUGE fan.