So there's an T.O. East End Newspaper called Your Ward News.  From what I gather its mostly a direct mail affair; the publisher, a guy named Leroy St. Germaine, has Canada Post deliver it to folks down in Ward 31 (The Beaches).  It has apparently always been a bit flaky/racist, but the last couple of issues have seen a guy named James Sears gradually taking over, until recently he was appointed "Editor in Chief". And he has taken the publication "Full Nazi": articles promoting holocaust denial by old Heritage Front members; articles praising Adolf Hitler; articles promoting "white pride". The works.

Back in March several mail carriers complained to Canada Post about having to deliver the publication, but company lawyers told them it was legal.  Since then the language in Your Ward News has grown more extreme, the Nazi references more obvious.  CP might want to revisit their decision.

In any case the thing is full of ads.  If the post office doesn't reconsider, a move against the publication would surely involve trying to convince some of the people behind these ads to discontinue them in future.

What interests me in particular is their February issue.  At this point they hadn't gone entirely mad yet, but for example Sears' Neo-Nazi New Constitution Party has already taken out a full page ad (back page), and there's an article about the perils of "uncontrolled mass immigration" which concludes:

A peak at their website tells you these folks are crazy.  Apparently, they're the people who recently distributed racist pamphlets up in Brampton.

And then there's this, an anti-wind piece from MPP Monte McNaughton, MPP for Lambton-Kent-Middlesex and one time contender for the leadership of the Progressive Conservative Party of Ontario: 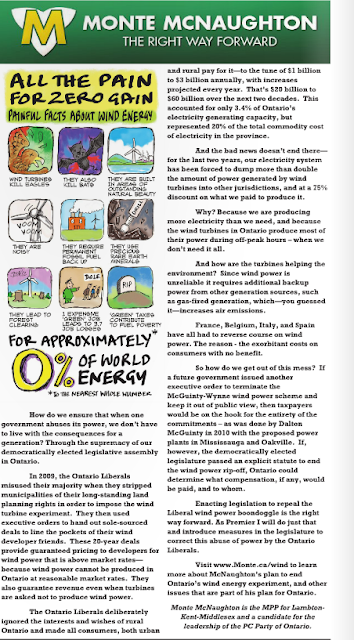 So, a question that one might put to Mr. McNaughton, or indeed to his new boss PCPO leader Patrick Brown, is: what the hell? McNaughton's campaign was all about catering to the hard right, but this is crazy.  Did he actually pay money to have campaign lit appear in this rag?

I should note that yesterday evening I sent Mr. McNaughton a tweet asking about his relationship to Your Ward News. As of this morning I have not heard back from him.

Posted by bigcitylib at 7:48 AM