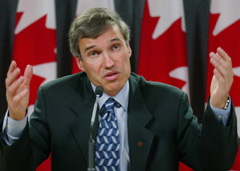 According to CTV, Saskatchewan farmer and two-time Tory leadership hopeful David Orchard is thinking about leaping into the Liberal race.

Ahh! David Orchard and I go way back. When was it? About 1997 or so, when the Tories were selling Memberships to anyone would would cut them a cheque for $10? This allowed David Orchard supporters to join up en masse, which garnered him just enough votes (about 18%) to deny good old Joe Clark his majority win. Because of this, the Tories had to go to a runoff, which made them look stupid as hell and cost the party millions.

And a couple of months before the leadership convention an idea started going around some of the Lefty mailing lists. Why not fork out ten dollars to the Tories and crash the party? That is, join up and vote for Orchard's insurgent campaign? Your own BigCityLib just did that, and helped set back the Conservative cause for nearly a decade!

Mind you, in so doing I became familiar with Orchard's ideas and beliefs and came to a certain admiration for the man. Certainly, he represented a wing of the Conservative Party (somewhat left, proudly Nationalist) that had fallen by the wayside, and probably doesn't exist at all anymore.

Except that he jumped very badly wrong in regards to the Kosovo conflict. He was peddling the whole pro-Serb line (like Lewis MacKenzie, I might add) where the Serbs weren't really cutting anybody's throat, and that people were doing equally bad things on both sides of the conflict, and that Kosovians were ethnically cleansing themselves, and so on. I lost a certain amount of respect for him over that.

But we shall see. If he does decide to run, he will be worth a good look at least. He has an impressive seriousness, though sometimes seems to be more like the head of a cult than a politician.

Posted by bigcitylib at 6:49 PM

Newsflash: the Tories still sell memberships to anyone who'll cut them a cheque for $10. (Or give them a credit card number.)

Mind you, you have to pledge your support for the founding principles, but the only controversial ones are probably the support for the right to private property (O Canada!) and the support for the consitutional monarchy. (Suspect that a significant proportion of the members don't actually qualify on the latter point, actually.)

The head of a cult... Hmmm. Geez. It did work for the Conservatives.