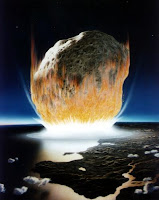 I've written a number of times re the theory, proposed by scientists like Allen West and others, that
...an extraterrestrial impact, possibly a comet, set off a 1,000-year-long cold spell and wiped out or fragmented the prehistoric Clovis culture and a variety of animals across North America almost 13,000 years ago.
Well, the theory achieved an important milestone in the last couple of days: a peer-reviewed paper on the topic has come out in the highly regarded journal Science, and the authors have been kind enough to make the .pdf available here. Specifically, the multi-institutional team behind the paper have discovered
A carbon-rich black layer, dating to 12.9 ka, has been previously identified at 50 Clovis-age sites across North America and appears contemporaneous with the abrupt onset of Younger Dryas (YD) cooling. The in situ bones of extinct Pleistocene megafauna, along with Clovis tool assemblages, occur below this black layer but not within or above it. Causes for the extinctions, YD cooling, and termination of Clovis culture have long been controversial. In this paper, we provide evidence for an extraterrestrial (ET) impact event at 12.9 ka, which we hypothesize caused abrupt environmental changes that contributed to YD cooling, major ecological reorganization, broad-scale extinctions, and rapid human behavioral shifts at the end of the Clovis Period. Clovis-age sites in North American are overlain by a thin, discrete layer with varying peak abundances of (i) magnetic grains with iridium, (ii) magnetic microspherules, (iii) charcoal, (iv) soot, (v) carbon spherules, (vi) glass-like carbon containing nanodiamonds, and (vii) fullerenes with ET helium, all of which are evidence for an ET impact and associated biomass burning at 12.9 ka.
Tiny diamonds, in other words, of the kind that tend to be associated with ET impacts.
Now, the theory is still a long way from proven. As one of the paper's referee's has noted:
...though the scientists [have] not proved their case, they [have] offered enough evidence that the idea warranted a closer look by others.
Several objections have been lodged against the hypothesis. For one thing, it is not entirely clear that the Clovis Culture collapsed at the appropriate moment. One recent paper found no evidence of a population decline among the Paleoindians at 12,900 ± 100 calBP .
Another issue is the lack of a crater:
“A body of this size does not just blow up without a trace in the atmosphere,” Dr. Koeberl said. “Physics won’t have it.”
Proponents have suggested that the meteor hit an ice sheet a couple of miles thick or that there was a series of smaller objects that exploded in the air. But Dr. Koeberl said something hitting an ice sheet would still generate a hole in the ground underneath, and he questioned whether smaller impacts or air explosions would produce the shock waves needed to make diamonds.
An impact should also have left remnants of melted rocks and shocked minerals, Dr. Koeberl said.
I actually raised this point in an earlier post on the topic. Dr. West's response, which obviously Mr. Koeberl has heard and thus far found unconvincing, can be found here.
Incidentally, Dr. West's description of the event
"Imagine these fireballs exploding in the air. A Clovis hunter standing and looking at these things would have seen a canopy of fire as these things came in and exploded," said Allen West, a geophysicist and one of the paper's co-authors. "There would have been no sound. There would have been massive explosions. Brilliant light, brighter than the sun. There would have been radiant heat -- it would have been capable, at the very least, of giving him serious burns and, at the maximum, of incinerating him."
...seems to call into question of the more intriguing recent findings that, as of last year at least, was cited in favor of the hypothesis: the mammoth corpses that appear to have been pelted with microscopic with iron fragments. It was argued that these fragments were bits shed from the impacting object. If so, however, should these mammoth corpses not have been "seriously burned" or perhaps even disintegrated?
Meanwhile, special exploding bonus: did a meteorite trigger a tsunami off New York City?

Posted by bigcitylib at 7:03 AM

Features known as Carolina bays are also purported to be a result of the event:

Anonymous said...
This comment has been removed by the author.
1:02 PM

Not sure if you caught this very interesting paper big lib, make sure to see the photos of the black mat in the supporting material: