At Issue: Does Fort Mc Smell?

We're in about day three of the backlash over singer/songwriter Neil Young's comments re the tar sands.  Particularly contentious was this bit:

"(I) drove around the tarsands in my electric car viewing and experiencing this unbelievable smell and toxicity in my throat — my eyes were burning," he recalled. "That started 25 miles away from the tarsands. When I was in Fort Mac, it got more intense. My son, who has cerebral palsy, has lung damage, (so) he was wearing a mask to keep the toxic things in the air out of his lungs and make it easy for him to have lungs after he left."

A number of folks, both within the media and outside of it, took umbrage at these words.  Some suggested Neil had spoken falsely.  Colby Cosh (@colbycosh) for example: 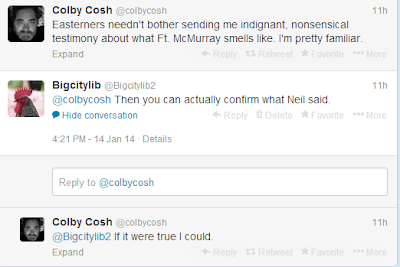 So I googled about to see if I could find references to the smell of Fort McMurray, Alberta, on the Internet.  Whoo boy could I ever!  From a visitor to the place:

A few locals still refer to the industrial stink that occasionally blows down into Fort McMurray as the smell of money. But for visitors and those not directly employed in the mines, the smell is more akin to hot garbage on a tire fire.

Now, the author of these words works for a men's mag, and Colby felt he was too effete-y elite-y to be trusted when it comes to industrial smells.


@Bigcitylib2 @dstaples Tell me more about what it's like in Ft. McMurray! You seem to know a lot about it from reading "men's magazines".
— Colby Cosh (@colbycosh) January 15, 2014


OK.  So here's from some local inhabitants:

Okay, is it me, or does anybody else smell that kind of "dump smell" in the air here in Thickwood and Timberlea. My husband says it is from the oil mines. To me, it smells like the garbage dump. It is disgusting! If it is coming from the oil mines, then we are really in Fort McMoney, Oilberta and that is the smell of money (kaching!)

I did not like the smell when we got close to the mining operations and processing sites - it would take a while to get used to. It is probably not too good for the health, but I have not done the research, or lived there long enough to find out.

From the Alberta Lung Society:

The main concern related to oil sands development with regards to air quality is from hydrogen sulphide gas: H2S(g).  H2S(g) has a very distinctive odour, of rotten eggs, however the gas can quickly paralyze one’s sense of smell.  If you do encounter the smell, this should serve as a warning to evacuate the area immediately and seek respiratory protection if possible.

H2S(g) is often found at high levels in the Fort McMurray area and other oil sands sites.  Exposure to H2S(g) leads to similar health effects suffered from carbon monoxide poisoning such as: dizziness, headaches, difficulty breathing and eventually death.

Although, here is a bit of good news, I suppose:

What sparked my attention was that I started noticing every guy in Fort McMurray smelled amazing.  How could all the guys in this town smell soooooo good?  I mean really, with all the dirty jobs out there at least one of them had to be a stinky dude.  But no I couldn’t find one stinky guy.

The residents are resiliant, and have found a way to cope.

In any case, the point isn't to pick on Fort McMurray.  At least not entirely. The point is that Neil's observation seems backed up by a fair bit of evidence.  It smells pretty much like he says it does (at least when the wind is blowing right).  And while we may be entitled to our own opinions re Fort Mc and the tar-sands, we are not entitled to our own facts.

Posted by bigcitylib at 9:10 AM

Email ThisBlogThis!Share to TwitterShare to FacebookShare to Pinterest
Labels: Colby Cosh Versus Reality, Neil Young Versus The Tar Sands

Anyone who has worked in a refinery knows the smell of oil processing. Of course there are smells to it, several of them depending on the process, the heat involved and catalysts, if used.

Hydrocarbons are organic material that has decayed over hundreds of millions of years.

And those tailing ponds, think they don't stink? Oh dear.

For a guy who's name sounds like it came out of a stinkin' effeminate sales product newsletter, Colby Cosh sure protests too much...

The tar sands should be shut down end of story. Fish, ducks and other wildlife - not including human life - are all victims of this criminal project of massive poisoning. This current Nazi agenda driven government is destroying the future for our children in the name of a few jobs for Albertans. Green energy if a proven fact that it will save our Earth. It is also a proven fact that green energy will create even more jobs than the dirty tar sands.

I find it difficult to understand my home province. Apparently, in order not be an arrogant easterner, it is now necessary to pretend that Fort Mac doesn't stink. For Mac stank horrendously (well beyond the pulp and paper mill smell which I remember from other bits of Alberta) in the late 80s when I was there and the tar sands were still an experimental development. I have not gone there since, I have to admit - would be shocked if it smells less awful now that the area being exploited is many times larger than it was before. Is Colby Cosh sure he has been there? If so, to adapt a statement by a left-wing radical that right-wing people like to quote, he has given up the struggle to smell what is right in front of his nose. I have a vision in my head of Colby Cosh, Ezra Levant, and all the other defenders of the Tar Sands passing through the city, all smiles, deliberately not noticing any smells.

There is much more to Fort McMurray than what gets reported in the media. I really wish Neil Young (and to be fair, Ezra Levant, as well) would stop using my city as a political tool.

The air smells like poison most of the time. I live and work here and it's what I find the hardest to cope with. Hopefully getting out soon!