On Pattern Recognition In Physics

Pattern Recognition In Physics (PRP, I'll call it) is a new, open access journal devoted to "experimental and applied aspects of pattern analysis, extraction, classification and clustering in all branches and disciplines of physics".  This sounds quite sciency but may mean not very much when you parse it carefully.  Anyway, it's published by Copernicus Publications, an "innovative" open access publisher of open access scientific journals that, from what I hear, is making an  honest stab at intellectual respectability.

To do a bit of foreshadowing, publishing PRP won't help them in achieving that goal.

One of Copernicus publishing's "innovations" is that they allow you to "Launch Your Own Journal":

PRP appears to one of these launch-your-own numbers.  And if you look at the Copernicus home-page its shown as a "new title", and the only papers listed are very recent.  We are looking at a first  issue.

Here's a cover shot of that issue: 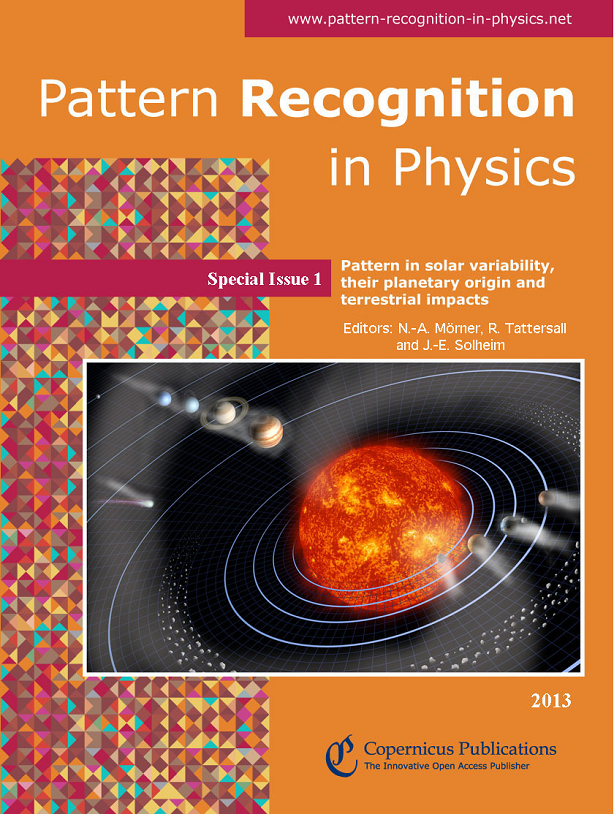 Hmm.  So its a "Special Issue".  What exactly does that mean?  Lets see:

Pattern Recognition in Physics (PRP) offers an efficient new way of publishing special issues which are commonly the result of a session or multiple sessions at conferences, but can also be from a small group of people deciding that a given special issue on a given subject of theme would be appropriate.

Now that's what it says for PRP.  The language seems to be adapted from Copernicus Publishing boiler-plate.  Here's another example.  But note that the last clause of the above (starting with "but can also...") is missing from the ESurf statement, and from similar statements made re other Copernicus journals.

So this is the first issue of a journal that's basically the result of a "small group of people deciding etc.".  Lets see who these are, shall we? Below is the authors list for the General Conclusions paper; the authors of the other papers in the issue are a subset of this list.

People that read this blog may be familiar with some of these names.  They are climate change denialists of one stripe or another.  Tattersall is a blogger who writes under the name of Tallbloke.   W. Soon = Willie Wei-Hock Soon. N. Scaffeta = Nick Scaffeta.  Nils-Axel Mörner is a crazed wingnut who is also a goddamn water witch!  JE Solheim thinks that a simple harmonic model (movements of the sun, moon and planets together with linear trends) provides a better fit to the global temperature data since 1850 and likely a better predictor than the assembly of 44 climate models used by the IPCC.  So you knows he's messed up in the head.

And etc. with the rest of them.

So what appears to have happened is that a small group of denialists paid money to Copernicus Publishing, launched their own journal under its  imprint, and published crap  Now they can say its all passed "peer review".  It will be interesting to see exactly what this means under the circumstances.  That they read one another's stuff?

On the other hand the reputation of Copernicus Publishing just took a boot to the nads.  I'm already hearing rumors of editors of/authors for other Copernicus journals launching complaints over this. If you are trying to maintain your cred as a scientist you don't want to be seen in proximity to this kind of nonsense.

PS.  I was wrong about this being a first issue.  Its the second issue but the first special issue, and the last of any kind, apparently. This is the first issue; its mostly the special issue with a few non-climate-related papers added.

Comments over at Tallbloke's are fun.