A few notes on this piece from Canadian Lawyer Magazine on the party's human rights platform.  One thing jumped right out at me:


First, the Wildrose states that it would repeal s. 3 of the AHRA. This section currently prohibits the publication or display of any statement, notice, sign, symbol, etc. that either indicates discrimination or is likely to expose to hatred or contempt a person or a class of persons protected under the AHRA (subject to a couple of caveats, including the guarantee in s. 3(2) that “Nothing in this section shall be deemed to interfere with the free expression of opinion on any subject”). The Wildrose says that the revised legislation “will maintain the Criminal Code standard of banning speech that advocates for acts of violence or genocide against any individual or identifiable group.” Presumably, this change is in response to the “attacks against freedom of speech” alleged by the Wildrose.

There are a few issues with this proposal. Although the Wildrose refers to the repeal of s. 3 in its entirety, its proposal to replace it with a different standard for hate speech makes it unclear whether it plans to repeal only the hate speech portion of s. 3 (s. 3(1)(b)), or also the prohibition on discriminatory publications (s. 3(1)(a)). If it repeals the latter prohibition, that would leave a gap in the legislation that would fail to cover publications that are discriminatory but do not reach the level of promoting hatred.

(s. 3(1)(a) is the equivalent to section 13 of the Ontario Human Rights Code, which I have written about here. It basically means that, since you can't deny housing, for example, to a person on the basis of their ethnicity, you can't post a "statement, publication, notice, sign, symbol, emblem or other representation"saying you are going to.  Like this one: 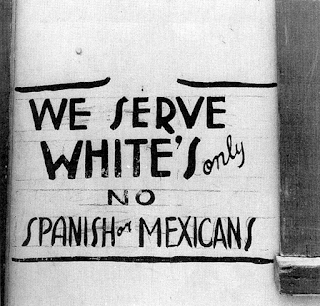 And while the folks at Canadian Lawyer suggest it is unclear whether allowing such signs is Wildrose's intent, the wording in their platform is quite clear.  They will:


Now, while we might argue about the limits to free speech all day and all night, I don't think any of us want to allow folks to post "No Dogs Or Irish" signs outside their restaurants.  But that would  be the effect of WildRose's proposed changes.

And of course the WildRose make the same mistake as do all the anti-human rights advocates who insist that the federal hate laws only speak to violence and genocide.

Uh uh, either they have not read the law or perhaps can't read, either way s318 and 319 make it clear that promoting hatred against an identifiable group is an indictable offense punishable with up to 2 years in prison.

Ever get the feeling that they haven't fully thought this thing out?

They remind me too much of those rightwing bloggers who use their blogs as a bully pulpit to demonize and intimidate everyone and everything they don't like.

I've had enough of such people and I think many others feel very much the same.