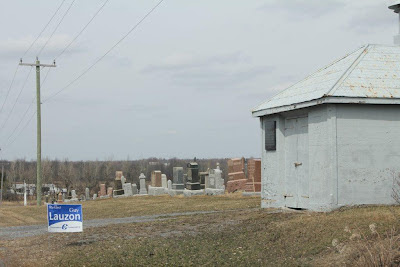 From The Cornwall Free News:

From the comments of the same story:

Yeah, Guy Lauzon has a problem with condolences. In December 2005, during the 2006 election, he showed up to campaign at the wake of a young woman whose family was predominantly NDPers and Liberals. The deceased woman’s niece, Kim Fry, had actually run for provincial politics both in Cornwall and Toronto for the NDP. Kim and her grieving family were flabbergasted when he started shaking hands and then he offered his condolences to Kim’s aunt, older sister of the deceased, by referring to the deceased as her mother. He really upset many of the mourners and was ushered quickly out of the funeral parlour chastised in no uncertain terms. He hastily departed without even an apolgy.
Later he claimed to Claude MacIntosh of the Standard-Freeloader that he thought the deceased was the wife of his really good friend and neighbor; such a good friend that he did not know the family name, he did not know what his good friend’s wife or daughter looked like, nor did he recognize anyone else at the wake. I don’t believe he even ever offered a formal apology. As far as the friend and neighbor, it turned out that the woman he claimed he thought it was had been buried weeks before.

And the pic is from this story, about when, during the 2011 federal election campaign, the Lauzon team put up signs in a Cornwall cemetery.

Email ThisBlogThis!Share to TwitterShare to FacebookShare to Pinterest
Labels: Guy Lauzon, The Dead