So, late last week The Heartland Institute puts up this bill-board outside of Chicago: 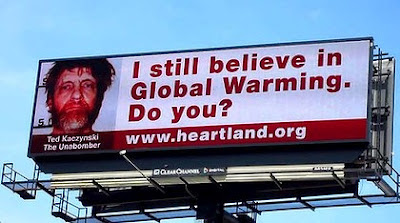 ...with the promise of more ads to come, featuring other notables such as Osama Bin Laden. The billboard, lets just say, gets noticed.  Leo Hickman is first out of the gate:

It really is hard to know where to begin with this one. But let's start with: "What on earth were they thinking?"

And a shit storm follows. HI allies like Canadian economist  Ross McKitrick threaten to pull out of this year's version of Deniapalooza (the annual HI climate conference) if the billboard campaign is not discontinued; conference speaker Donna Lafromboise, another Canuck, does indeed pull out.  By late Friday, Heartland has already pulled down the billboard although, as many people have noted, they don't sound particularly apologetic about comparing folks who believe in the science of AGW to mass murderers.

Fortunately, the fallout has continued through the weekend.  Most significantly, Diageo, one of the world's largest drink manufacturers, has decided against providing further funding to the Institute:

Following the widespread outcry triggered by Heartland's billboards, a Diageo spokeswoman told the Guardian: "Diageo vigorously opposes climate scepticism and our actions are proof of this. Diageo's only association with the Heartland Institute was limited to a small contribution made two years ago specifically related to an excise tax issue. Diageo has no plans to work with the Heartland Institute in the future."

Various pressure campaigns against HI's remaining sponsors continue. DeSmog Blog has provided a handy list of these companies if anyone wants to pen an aggrieved email.  Of course, the bulk of HI's funding is provided by a single anonymous donor.  This story in the Shimer College Events Examiner puts into words what many have suspected:

In February, the "Denialgate" security breach exposed Bast's administrative incompetence, as well as internal Heartland documents that strongly suggested that it had been receiving massive infusions of cash from the same source that had bankrolled the attempted takeover of Shimer: Chicago industrialist Barre Seid.


We shall see where this story goes.  But, watching the push-back against HI build from my small place behind the scenes, I will say that the climate science community has learned alot about fighting back over the past couple of years.  It is not out of the question that, with some continued effort, the Institute might be forced out of business.

Posted by bigcitylib at 6:26 AM

It could not have happened to a nicer institution. :)

Does this remind you, at all, of the Chretien ad? It does me. What were they thinking!