But what does it really tell us, other than that the flailing hacks  of the Canadian pundisphere couldn't move public opinion with dynamite and a backhoe?

Also, 45% of respondents said a low Canadian dollar that supports manufacturing was better for the country than a high dollar bolstered by resource exports, compared to 35% who disagreed.


The issue was recently championed by Mr. Mulcair in his comment on Canada suffering “Dutch disease” — when a high currency value hurts blue-collar manufacturing jobs.


Have we entered a "post-Western" age--in the same way that over the last decade we entered a "post-Quebec" age--wherein we realize that all that "Western Alienation" nonsense was just a cover for an Albertan tendency to whine?  Have we finally realized that, if The West doesn't play nice, the only thing they'll be able to do with their oil is make tar-candles from it and sell them to one another?  And have we realized that Alberta doesn't even speak for The West anymore?  Because, as the figure below suggests, the NDP is quite competitive in Saskitoba: 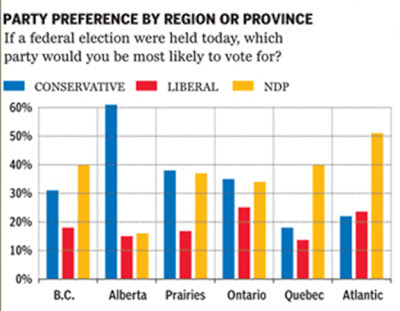 And has the LPoC realized yet that the Mulcair NDP isn't just fumbling around, that they have a scheme to win specific seats in specific regions of this great land?  And do they realize that something similar will be required on their own part if they want to challenge for those seats?

Posted by bigcitylib at 9:32 AM

A poll in Saskatoba last week had the NDP tied with the Liberals in the teens.

That Canada should consider taking the lead of a Province who has so clearly failed, utterly, to attend to the needs of their own citizens.

Worst GDP per capita, except only New Brunswick, P.E.I., and Nova Scotia.

And hords of students who can't be controlled as they complain, bitterly, over having the lowest tuition in Canada.

And, yet, as you post, the polls suggest they're very popular.

I might suggest this - having regard to the recent experience in Alberta.

It's easy to say you're going to support a party you have no intention of actually putting in government until you actually walk into the voting booth.

I wonder if the NDP are doing any worse in Edmonton, for that matter.

If I were in charge of the LPoC I'd do my utmost to shut Warren Kinsella the fuck up. His latest charge up the hill (over Mulcair's garage; says it's not about his mortgages) sees him coming across as not only his usual over-the-top angry, but teetering on the edge of reason. Shit like his only strengthens my resolve into wanting to support the NDP and see the Liberals die an unhappy quick death.

We Liberals were saying the same thing about official opposition status - and then the NDP won 100+ seats last May. Mulcair is also regarded as a moderate, having served in a Liberal Party cabinet post in Quebec, where the Liberals are definitely business-oriented and lean to the right. The fact he was an Environment Minister and resigned on principle rather then allow a private development in a public park, and that he's willing to face the Conservative criticism head on rather then try to backtrack or avoid it doesn't hurt the cred either.

I wouldn't underestimate him or the NDP right now.

Interesting poll. They framed the "Dutch Disease" debate as such:

1. ‘Which do you think is better for Canada, a high dollar based on resource exports, or a low dollar supporting manufacturing?’

It's a winning point, and I think it's getting lost in the current debate (Tar sands suck vs. you hate Alberta).

I'm curious about the methodology on this poll. A poll Angus Reid shows the Conservatives leading. The biggest difference between the two -- the additional questions Forum asks on income disparity, the high-dollar, and Conrad Black.

But it's obvious that splitting the political spectrum's not allowing a lot of room for the Liberals.

If I were in charge of the LPoC I'd do my utmost to shut Warren Kinsella the fuck up.

What could they do? Kinsella doesn't work for the LPoC. He does whatever he wants to. Sometimes I find him infuriating, but in the end it's his opinion, he's an adult, he's entitled to it.

Obviously at the end of the day they can't stop him from saying the things he's entitled to say, but they could distance themselves from him and his opinions. Laugh at him publicly, call him a "dumb blogger" more often. Marginalize him. Or not. Hey, if alienating progressive voters is what the LPoC is striving for then leave well enough alone. Makes no nevermind to me.

I would look at the NDP braintrust rushing Mulcair to the oilsands and western Premiers as real evidence that they see the potential problems with his recent comments.

For me, Mulcair can do well on the question, but the key is how he frames it, how he comes across, does he have the nuance to make the case without looking like a guy who can't along with anyone. I called his dutch disease move a shrewd gambit, the electoral math works all day long, however if the debate morphs into national unity, it's a long term killer imho.

Biggest part of this poll for me, people outside Alberta would rather have a lower dollar, this will be key for Mulcair if he can play this like a statesman and not a bull in a china shop.

Kinsella has taken shots at the LPoC (Martin, Ignatieff, the Toews twitter situation, Rae) among others in the past and very not-so recent past. I never saw Kinsella as being close to the LPoC. I mean, if he is, I'd hate to see how he treats people he dislikes. ;)

In the end of the day, Kinsella is Kinsella. Everyone loves him until he comes gunning for their dog.

Doesn't the high Canadian dollar, send other country's out to shop for cheaper goods?

Canada's resources, such as the oil sands are foreign owned. So are mines. Canadian jobs aren't protected either. Country's are bringing their own people, to work those foreign owned resources. Harper is permitting China to bring thousands over, to build the Enbridge pipeline.

Harper is trampling BC citizens. He is going to force the Enbridge pipeline on BC. BC gets the pipeline bursts and the dirty oil tanker spills, and that's about all they get. Over 75% of BC citizens, are supporting the F.N. people, to stop the atrocities of the pipeline and the tankers, from destroying F.N. food sources.

Harper has sent the oil clean-up crew to Halifax. Harper has shut down three Coast Guard search and rescue centers. That's exactly how much Harper knows about the danger of the coasts terrible storms.

I would like Harper to be sent adrift on a boat with a fire on board. Do you think he would mind, if the coast guard had to take an hour to get to him?

Might be some confusion here. I was replying to Steve W's comment on Kinsella. I believe the recent controversy is over Kinsella's criticism of Mulcair, not about Kinsella's criticism of the Liberals. (The more I think about this, if the LPoC had any sway with Kinsella, they would have used it years ago.) As for shutting up our critics... there'd be no Libloggers left if that was official party policy (seriously, I love the fact that Liberal bloggers will take a punch at the party at times. It hurts, but it keeps things grounded).

2. Connected to the LPC.