Wind Energy And Property Values In Ontario, Part Whatever...

An interesting decision came down this week re wind energy and property values in Ontario.  Before getting to the actual contents of it, though, lets see how the thing is being spun.  This piece from Farms.com  is fairly typical:

An Ontario Superior Court of Justice has determined that landowners living near industrial wind turbine projects do suffer from diminished property values. The court accepts that 22% to 55% loss of property values is occurring today.


It also gets things terribly wrong,  misreading the meaning of accepts in the relevant context.

What actually happened is that the wind developer, wpd. Canada Corporation, and the farm that has agreed to host the nascent project--Fairview Wind has not been built or even approved yet--moved a motion that the claims against them by nearby property owners be "dismissed in their entirety". They won, hands down.  However, as part of their legal strategy (all these screen shots are easier read if you click on them, by the way): 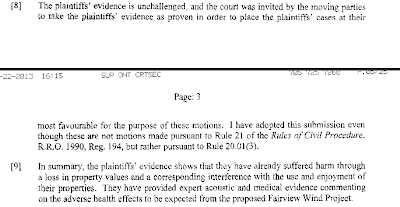 In other words, wpd. Canada said; "Lets conditionally accept the plaintiff's evidence of diminuation for the purpose of the motion so we can  get on to the legal issues that would arise even if they were true."  The judge said OK, and  found that even if the plaintiffs had suffered the diminuation of value  claimed, there was no case: 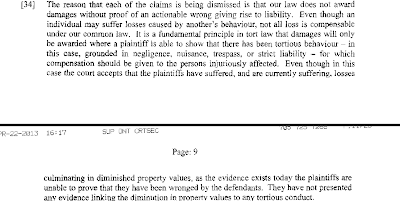 Even accepting the plaintiffs' claims, which the Judge did provisionally, the plaintiffs can't sue wpd. Canada just for announcing the publication of a Notice of Draft Site Plan, which is as far as Fairview Wind had ever got.  You can't sue somebody over environmental/health risks that do not yet exist.

So the judge handed a win to the wpd. Canada and invited the plaintiffs to come back when if ever the project had been taken further along in the approvals process.  At that point their evidence will be tested, challenged, and evaluated.  Contrary to the various newspaper stories, this has not happened yet.

Just a final note as to why wpd. Canada chose to go this route.  This is speculating, but I imagine challenging the plaintiff's evidence would have involved wading through tons of crap science and eventually hiring expert witnesses to go up against the other side's expert witnesses.  Fairview Wind is pretty early along in the approvals process to lay out that kind of money when a cheaper route to victory is available.

Posted by bigcitylib at 7:25 AM

Astute observations. While I would have liked to see the case lost by defeating the plaintiff's arguments, it was unnecessary in order for WPD to win their case.

The plaintiffs created some useful, albeit deceitful, spin for themselves so they'll probably call it a victory. Lets hope that Justice Healey awards full costs to WPD to make it a Pyrrhic victory.

There's not really much difference in the interpretation from the "Foes of Wind Power" side either. It does provide a basis for those developments that already have been approved. I don't think there's any win or loss to be found here, just a clarification as to the process and timelines. I'd be curious to know what the "deceitful spin" the plaintiffs claim are.

We must agree then that Gillespie's interpretation is an attempt to drum up more suckers.

Windmills chop up thousands of birds and bats every year. Where is the outrage?

Oh yeah, they are too busy crying over 2 ducks in a tailing pond in Alberta.

"2 ducks in a tailing pond"

But you wont be around to see their cancer will you Steve.

BCL. What makes you think everyone's using Mr. Gillespie? I know that in Saugeen Shores we're not.

Despite the arguments against wind power generation, no one can deny the effectiveness if wind turbines in providing 100% clean and green energy. One can also avail tax credits by installing wind turbines to recover the some portion of purchase and installation cost.