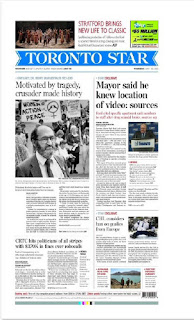 The story's not on-line yet.  Source of image is their editor:


PS.   Here is the story.  From its contents, I would guess that the staffers who were sacked or who quit and were then described afterwards as "useless" by those still in Rob Ford's office have decided to strike back.