Trudeau's Honeymoon Is Over? I Think Perhaps Not!

As has been the case since Trudeau became leader of the Liberals, his party continues to enjoy about a 10 per cent advantage over the Conservatives in the Forum polls, 39 per cent to 30 per cent — numbers that haven’t changed since last month.

The NDP sit at 20 per cent, down slightly from last month’s 22 per cent support.

OK.  That's just Forum.  But EKOs has some federal numbers out today too, and an accompanying graph! 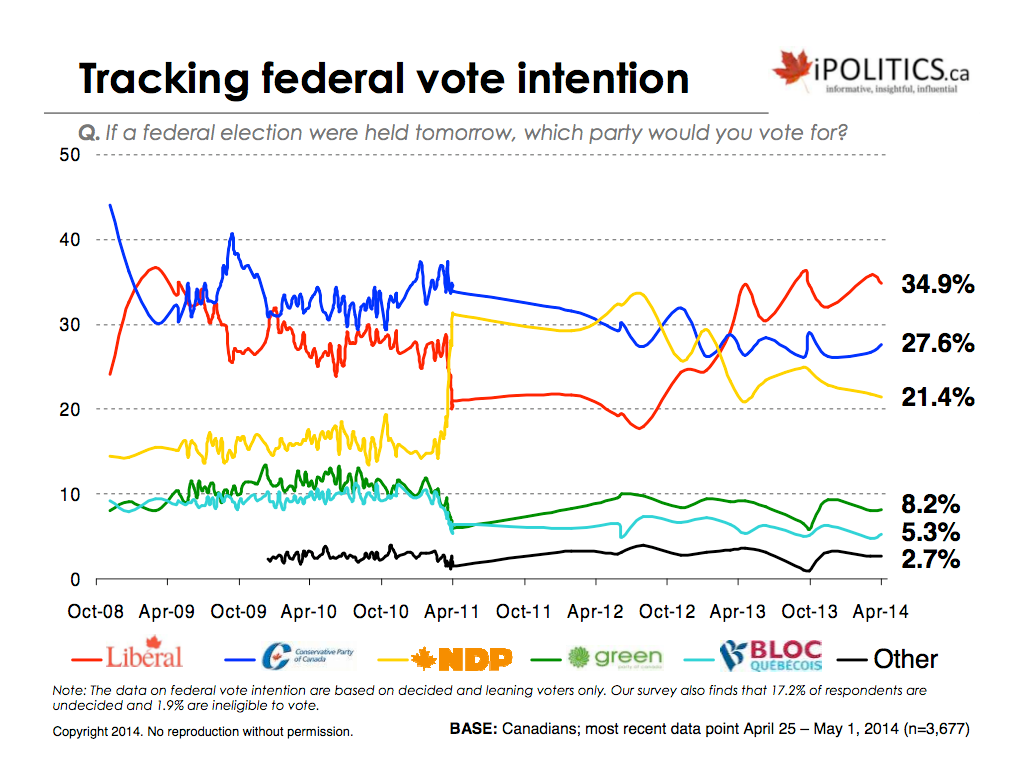 Who knows about the honeymoon, but can we at least hold off on the obituaries?

Posted by bigcitylib at 7:33 PM

I would not call that an obituary, and I think she should be listened to. During the last election, as soon as the NDP started building support in Quebec, LPC support in the ROC dropped.

In my opinion what happened is the anti-Harper crown began to believe that Layton was the best chance of beating him, but the anti-NDP crowd feared an NDP government so they switched to the CPC, making th election NDP v. CPC and the LPC being left out in the cold.

What I think Hebert is saying is that could happen again. And if that is what she is saying I agree with her.

Iggy vs Layton. Justin vs Mulcair.

The anti-Harper crowd found it very easy last election to switch support from Iggy to charismatic Layton. But next election, I think the reverse scenario is more probable, since Trudeau seems fairly well liked, and Mulcair isn't as good a politician as Layton.

People are also wise to the Harper slime machine. What the PCs do, advertising-wise, in the upcoming Ontario Provincial Election, is a likely preview of the tactics that the Conservatives will employ federally. The two candidates, Wynne and Trudeau are similar in the that the public already has a fairly good impression of them (not like Iggy).