I Too Hate The Weaselly Ferret

But my hatred clearly does not surpass that of Presidential candidate Rudi Giuliani, who banned the creatures as pets when he was mayor of New York and once told an irate caller to his radio show:

Ferrets are affectless, tiny-brained land-sharks that endlessly prowl their enclosures looking for something to kill. A neighbor's ferret nearly ate my pet iguana once when he brought it over. Luckily, Oogie took refuge up the top of a curtain and shat on the nasty little beast. The ferret also used to get loose, bring back the neighborhood cats, and stuff their dead bodies under my neighbor's fridge (I'm not a cat person either, but this still seems wrong).

Plus it gave off a weird, musky smell.

But a ban on them is a bit harsh. You wanna see a pet they outta ban? 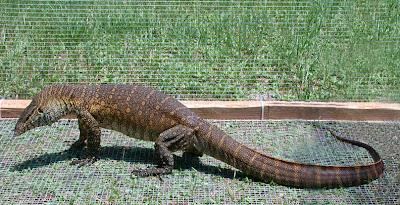 The Nile Monitor (Varanus niloticus) is relatively common, and therefore relatively cheap to collect, so it turns up frequently in pet stores. It arrives as a cute lizard about the size of your hand, with bight yellow stripes down the side. Within a few years it has grown into a bad tempered, essentially untamable meat eater about three feet long. Then four feet long. Then five feet long, and you keep feeding it out of fear.

h/t to the Galloping Beaver.

Posted by bigcitylib at 8:32 AM

Ferrets should get honorary membership in the LPC . . . they'd fit right in.

And what is the official animal of CPoc? The bush hog?

Most lizards give me the impression of being life support systems for a digestive tract...and that include Stephen Harper...

Rudy is still leading Republican candidates in the polls isn't he? And they chose Bush to run for them the last time.

What's with their obsession with weaselly ferrets?