A Plethora Of Hockey Sticks 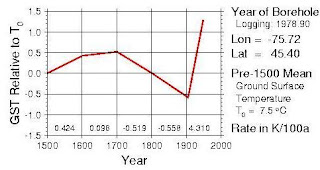 In any debate over Global Warming, Michael Mann and his "hockey stick" graph come up. This is of course the graph that shows a reconstruction of global temperatures from about 1,000 AD to the mid 1990s. You occasionally hear, from GW skeptics, that the graph has been "refuted" by Stephen McIntyre and Ross McKitrick, although the U.S. National Academy of Sciences concluded last year that:

The basic conclusion of Mann et al. (1998, 1999) was that the late 20th century warmth in the Northern Hemisphere was unprecedented during at least the last 1,000 years. This conclusion has subsequently been supported by an array of evidence...

What's more interesting to me, however, is the additional claim, which many climate scientists have made, to the effect that any methodological short-comings in Mann's work are irrelevant, because his main findings have been replicated by alternative methods.

Which brings us to the graph top-left. It provides 500 years worth of average temperatures in the Ottawa, Ontario region and has been produced using one of these alternative methods. Specifically, it has been produced by dropping thermometers down pre-dug boreholes and recording the temperature change that occurs as this measuring device plunges deeper into the Earth. How the results are calculated from data-points gathered in this way, and some of the drawbacks to the method, can be found in this terrific (and only somewhat technical) post at Open Mind.
The original data can be found here.
Note the important thing: the graph pretty much replicates Mann's result.

Posted by bigcitylib at 1:53 PM

And what scientific confirmation is there between borehole temperatures and CO2 levels?

there have been assholes in Ottawa for what seems like 500 years, but I can guarantee there have not been boreholes providing temperature data for 500 years.

If ya ask around you'll find that Ottawa was under a few miles of ice just 15,000 years ago and the warming that melted it all was not triggered by Hummers or Dr. Fruit Fly's diesel bus extravaganza.

Or you could go up to Meach Lake and find old ocean beaches - 800ft above current sea levels . . go figure about the rising oceans that are going to drown us next year according to The Goreacle.

more Hockey Stickista who has consumed too much Mann Kool Aid . . .

Where did Dr. Mann put the Little Ice Age anyways ??

All these anons are idiots. They have not been checking the boreholes for 500 years you dipsticks. These boreholes can be used to infer climate data going back 500 years. The fact you don't uderstand how doesn't make it wrong, it makes you ignorant.

I think this sheer stupidity on the part of the anon's is astounding. They come here and pretend to be well versed on this topic yet have no understanding of data collection.

Another alarming note is the ridiculous notion that the ocean used to reach Meech lake. If there was an ocean there it wasn't Meech lake at the time. Anyone hear of plate tectonics? Supercontinent breaking up and becoming what we have today (after many permutations)? Himalayas being formed by plate slamming into another and being forced upwards? Anything ringing a bell?

You can find shells in the mountains because once that land was sea level. It is now above sea level because of plate deformations and thrust.

Its bad enough you deny climate change but to even propose something so retarded as your statement about the ocean lapping against Meech Lake is beyond dumb. Do you also believe the world to be flat and 6003 years old by chance?

The little ice age argument is a complete sham. It wasn't global but regional, limited to the North Atlantic. It was the result of a modest drop in temperature to about 1 degree Celsius. Thus as an argument against global climate change it is useless as it is only regional and likely the result of interaction of the Northern oscillation and southern oscillation.

Just to let you anon's know, new information is pointing to the cause as being anthropogenic in nature.

Following the black death and the decimation of the European population, there was less agriculture and forestry resulting in less CO2 being produced and more removed by regrowth of flora.

Stick that in your pipe and smoke it you ignoramus'.

"You occasionally hear, from GW skeptics, that the graph has been "refuted" by Stephen McIntyre and Ross McKitrick"

which is rather disingenuous of them, given that three years ago Tim Lambert discovered a basic flaw in McKitrick's methodology that demolished his entire case :

"Trouble is, the software he used expects angles to be measured in radians, his data has latitude in degrees, and he didn’t convert from degrees to radians. Consequently, every single number he calculates is wrong."

These boreholes can be used to infer climate data going back 500 years. The fact you don't uderstand how doesn't make it wrong, it makes you ignorant.

It's their approach to everything. It's a redneck thing...arrogant ignorance.

I swear, all the GW skeptics sound like 6 year-olds, uttering a constant stream of "why's" to annoy their parents.

anonymous,
Do you realize that you are making a very absurd statement based on 500 years of data? If you look up a graph showing 1000 years of data, that little "problem" you identify is nothing, just part of the natural up and down. Background noise.

I know it is too much work for you to actually research everything you grasp at but I'll give you another tidbit. That graph and all others showing temperatures across time like the one in this post never deviates from natural cycles, until after the industrial revolution.

You can see from that limited graph that ups are followed by downs as the planet's natural systems works to balance itself out. The higher the up, the lower the down that will follow.

This can be taken as a bit of advice. The hotter we make the planet, the colder the system will be when it crashes in order to control the heat build-up. Think of it as rebooting.

ti-guy, the 'why' is the reason we have 'science' in the first place. It's ALWAYS the first question.

You should try to keep up, dumbo. Any fool can ask "why;" You did, without suggesting a hypothesis, which is where your blithering, disingenuous, agenda-driven questioning ends and real science begins.

Science doesn't entertain doubt as an end in itself, which is what you deniers are doing (which is also what the Creationists and ID'ers do). The fact that you think you're fooling anyone is, well...tragic...quite frankly.

Hentai-guy, go back to your comics. You're just making an ass of yourself here. You have a hard enough time trying to make sense yourself, let alone trying to put words into other people's mouths which make sense.

Any dipshit can answer his own 'why' question. "The earth is warming because it has a fever." That's the stupid hypothesis. Now gather evidence and identify or confirm the physical laws which govern the phenomenon you are observing, and try to predict what happens when you change input variables. You also have to examine and investigate other reasonable hypotheses as well, not just focus on your own. Which is what the Kyoto Kool-Aid Krowd is doing.

How 'bout you provide some "other reasonable hypotheses" for global warming? Present them and provide the source of data.

Here's a hint: blaming it on the sun or on cosmic rays won't work; and don't wail "But Mars has global warming!" because it doesn't. Blaming it on sasquatches won't work either, but might get people's attention.

I'm still not clear how sticking a thermometer down a hole will show the temperature from years in the past, but that is not why I'm posting.

I'm refuting your assertion that the little ice age was a regional phenomenon. If you go to (http://www.john-daly.com/hockey/hockey.htm), you can see at least thirteen exhibits from all around the world verifying the medieval warming period, and the little ice age. There are records from Africa, Peru, Taiwan, China, Australia, Japan, California, and several others. If it were local, why would all those places have similar records?

The Black Death happened roughly 1347 (although there are reports in China from the 1330's). That is almost half a century AFTER the peak of the medieval warming period. Therefore your assertion that all the deaths from the black plague made the weather drop is backwards. It should have started dropping around 1350 when the plague was the deadliest. Also it should have dropped each time there was a reoccurring out break in 1498, 1535, 1543, 1563, 1589, 1603, 1625 and 1636 (1666 is recognized as the last major out break).

And finally, you stated that after the black death there was less CO2 being produced. While I will admit that 75 million people can exhale a lot in their lifetime, I don't think that is enough to cause the temperature to drop. Unless you are going to state that the people who have died aren't driving their cars anymore.