That's the most logical way to square these two polls, which show Stephen Harper's personal popularity "soaring" while his Conservative Party can't draw flies among the Canadian electorate.

Which is to say that Canadians are more like Europeans than Americans in that they are more likely to vote issues over personalities, and see their party leaders more as managers of a package of competing and contrasting positions, not alpha male warriors hacking their way through the opposition benches with a broad-sword. 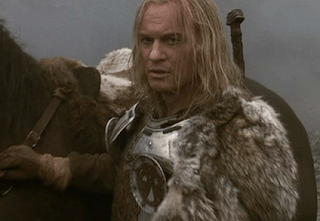 suspect the SES-SunMedia poll showed crap Tory voter intention numbers as well, or The Sun would have led with them.

Not Suited To Canuck Politics!

Posted by bigcitylib at 5:31 AM

Harper personifies the heart of his party; all packaging and when the contents are exposed, there's little substance. At some point in time folks will, by nature, opt for real nutrition.

and Steffi is running a distant third.

Or is it the LPC in third place?

Well, According to those numbers 33% of voters don't want ANY of the leaders listed. 'None of the above' is a close 2nd, and the numbers, except for Dion, generally reflect the party position as well.

So I'm not sure how Harper can be 'soaring' when he is not favoured by 63% of the electorate and is favoured only slightly higher than a scandal plagued Liberal administration and 'none of the above'.

People are tired of the "Wolf" cries, and are beginning to see how desperate you Libbies are. Talk about lack of substance - what are Dion's plans to tackle poverty again? Are these the same plans Chretien promised to use back in '93 only to see poverty grow under his watch?

Somebody please put a charcoal filter on Dion's mouth to cut the stench of BS.

Gosh, Conservatives are stupid. Really...I can count on one hand the number of Conservatives I don't consider ratchet-jawed rednecks, hissing and shrieking all the time.

"Talk about lack of substance - what are Dion's plans to tackle poverty again? "

Same place all those 'Accountability Act' regulations for lobbyists are - nowhere.

In the meantime, the lobbyists are chugging along, business as usual.

Idiot Conservative anon-trolls who assume everyone that doesn't bow at the mention of Harper's name is a Liberal.

Gosh, Conservatives are stupid. Really...I can count on one hand the number of Conservatives I don't consider ratchet-jawed rednecks, hissing and shrieking all the time.

I don't doubt you need to use your hand to count, given the horrific toll mental illness has taken on your faculties.

The entrenched popularity of Liberals in Ontario is proof positive that you can lead an ass to the polls, but you can't make it think.

Well first of all, Alan Rock would seize his sword because only the police and military should have weapons. It promotes a culture of violence, you know.

Secondly, the human rights commission would look into whether there is any race, religion, sexuality, or other prejudice in his hatemongering of Grewald. But nonetheless arrested, pilloried by the MSM, and sued by every feminist, ethnic, and gay group out there.

Third, if he tries to defend his own life, he'll be thrown in jail.

That's the key to your bitterness and rabid anti-Americanism, isn't it. You still wish you had been born a serf, a European peasant in some socialist hell-hole so you could work less and look down your nose on those uncouth North Americans. You'd rather be Euro-trash who let's their elites think for them, than a free and independant citizen. If you think Europe is so wonderful, why don't you move there, and get away from the horrible, inevitable Americanization of Canada that Harper is wanting to shove down our throats. I'm sure you hate all those other American ideologies, like freedom of speech, freedom of the press, civil liberties, separation of church and state (which you lefties don't even understand anyway).