She Signed It Too!

I got my package from Access To Energy today, or the Oregon Institute for Science and Medicine, or whatever they've been calling themselves lately. If the names don't ring a bell, these are the guys behind the Oregon Petition, a petition signed by 20,000 or so "scientists" opposed to the Global Warming consensus that circulated during the late 1990s. Some of these scientists included Perry Mason and Dr. Geri Halliwell.
Well, the Oregon Petition is back, and I have joined those brave dissenters against the U.N. greenshirts led by that fat enviro-bastard Al Gore.
Here's how I did it. I contacted A. Robinson (by mail) when I heard the petition was up and running again, and told him that I was professional statistician, which is true in the same sense that the manager of your local McDonald's is a professional chef. I told him that I was appalled at the deterioration of the Scientific Method in the hands of Climate Scientists, and in particular complained about the promiscuous employment of "cubic spleens", which I referenced to a paper I found on a website--some glacier guy (2004), I think it was.
(I should say that although I was previously aware that "cubic spleens" were a form of statistical filter, when I googled them afterwards I was surprised that they were not at all boxlike in shape, so the whole "cubic" thing eludes me. Furthermore, they only come in black and gray. Very disappointing.)
And yesterday morning my package finally arrived!
And I'll tell you something, its a sweet looking package. The only thing missing is a picture of a half naked girl signing the petition, which would convey the impression that if you signed you might possibly get laid, which would carry a lot of weight with scientists (be honest, nerdlingers).
In any case, its got graphs and footnotes and the whole shebang. You science guys are going to get your ass kicked until you start publishing on glossy paper.
And the best part is, I can send for more packages and petition cards, so I can give them to all my dissident scientist friends, like my buddy professor Von Dickenstein. 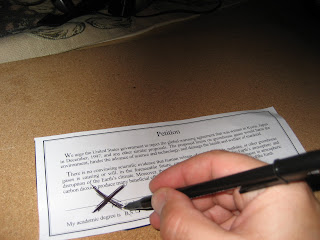 Posted by bigcitylib at 4:58 AM

Ah! The KKK of environmental science.....did you get a pointy hat too?
Foot'

"and told him that I was professional statistician, which is true in the same sense that the manager of your local McDonald's is a professional chef."

so you admit in public you are a liar & a con man.

Some stupid there boy, but being a Liberal means you have no morals anyway so we shouldn't be surprised.

so you admit in public you are a liar & a con man.

Boy, I predicted a troll would say that.

They're so cute when they attempt ethics.

You're in high school, aren't you. Glad to see that you can really bring some professionalism to the process.

Way to go, bcl, way to 'strike back' at mature behaviour.

God, you trolls suck the humour out of everything with more force than you apply to your own auto-fellatio techniques.

BCL, you deride the petition because it was signed by Perry Mason and Dr. Geri Halliwell. Are you aware that Perry Mason is a real Ph.D. chemist (Did you think a person couldn't have the same name as a fictional character? Is there a law or something?) and Geri Halliwell was planted by environmental activists in a transparent attempt to discredit the petition? But then I guess it worked because it has been repeated endlessly by those such as you and many will read it without knowing the real story. see http://en.wikipedia.org/wiki/Oregon_Petition .

Well, that's what happens when you don't take credibility seriously. Sensible people stop giving you the benefit of the doubt.

Wingnuts should really become more acquainted with how that principle operates.

Ginger still has a better grip on science than you.

Just because you name your dick "science" doesn't make you right.

Out of 11 posts, 4 are by you Ti-Guy. Slowing down are we? What a tragic life you lead. Please just go away.

But who will you stalk if I go away, Flaming Panties?

Now that I know you're stalking me again, I'm going to be even more annoying.

All of this could be avoided if Panties lost a little weight, didn't drink so much, and started dating. Then his pathetic life would have some real drama...

In fact, the OISM petition project was the first "skeptic" paper that I really took a look at (i.e. check the references).

I would appreciate the chance to discuss it with supporters of it here. We could look at the old one or the new one - whatever you like.

Here is a chance to actually discuss the science - how about it?

wait a second, first question, what is the relation between global warming and a Geri Halliwell? and why a group of scientifics want to hide a obvious true? is like to want the true about the benefits of Buy Viagra, is totally non sense.