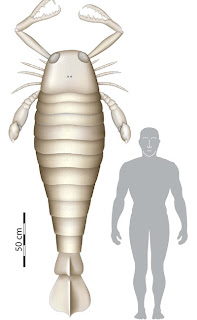 British scientists have stumbled across a fossilized claw, part of an ancient sea scorpion, that is of such large proportion it would make the entire creature the biggest bug ever.

(PS. A confession. In monster movies I always cheer for the giant bugs.)

Apparently our ever so tasty crustaceans ARE directly related to insects. Sea bugs indeed but how to say no?

You just had to mention that lollipop again. Eew, and double-eew.