Why Don't They Just Make Sushi? 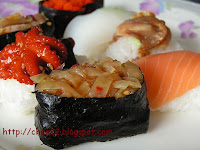 Aquaculture off the Northern Irish coast has been devastated by a swarm of jellyfish that left 100,000 salmon dead. Stock worth £1million were suffocated in their cages by the swarm, which is estimated to have covered 25 square kilometres of sea and been up to 10 metres thic...Some reports say there may have been billions of the mauve stinger jellyfish.

Another effect of AGW? I can just hear Lomborg now! "Adapt, you assholes! Adapt!"

PS. The above is indeed a sample of "Kurage" (jellyfish) sushi.

Posted by bigcitylib at 5:50 AM

So, there is hope to rid ourselves of the Pacific coast fish farm after all.

To you Anons, I don't know when you were last out on the waters of VanIsl but I've seen a real increase in surface jellyfish. Will we get the swarms that have developed in the Med and Irish Seas? Hard to tell. If we do, a jellyfish infestation added to the existing sea lice and red tide problems might just be enough to do in the fish farms. But then what would all those people from Alberta to Ontario do for "Atlantic salmon"? (To my friends out there, if it doesn't say "wild", it's not).

Well mound of sound, the issue is whether or not that is a NATURALLY OCCURING phenomenon. You may have observed - anecdotally - or perceived an increase in jellyfish. Can you explain WHY there is an increase? Can you document how much more there are this year, and what they were over the last 200 years? What do you know about jellyfish habitat and their life cycle? THEN you can make an informed decision. Otherwise you look like a fool.

If you follow the link you will then find a dozen or so more links to actual studies connecting MOS' anecdote to solid scientific evidence that jelly fish are indeed increasing and this is probably caused by AGW.

Feed the jellyfish to the poor. Two problems solved.

Again, prove that MAN caused the incremental change in climate which affected the jellyfish. You can't, so don't blame it on AGW.

Those jellyfish are off the Irish coast. Where does it talk about the west coast of Canada? It also mentions that jellyfish can have 10- to 30-year cycles. How long has MOS been observing jellyfish populations of VanIsle?