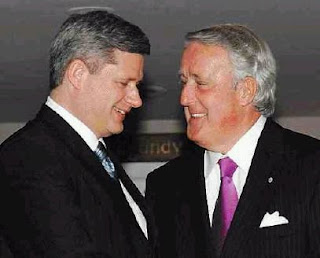 ...any public inquiry into the Brian Mulroney-Karlheinz Schreiber affair should examine the actions by Prime Minister Stephen Harper's Conservative government. What did Harper know about those letters and when, and if he knew nothing, why is that too?

Dion lays it out in a letter to David Johnston, the academic appointed to review the affair. The inquiry should cover, among other things:

The management, follow-up and response to correspondence sent by Schreiber to Harper, his staff and members of his cabinet;

The Department of Justice's decision not to proceed with an internal examination into the possibility of setting aside the Government of Canada's settlement with Mulroney;

The possibility of conversations or correspondence between the current Prime Minister or any of his staff or cabinet ministers, and Mulroney or his representatives, relating to this file; and

Damn,Dion gives good letter. Maybe he should text his questions to the House during QP and have Iggy read them out.

Meanwhile, the consensus among Blogging Tories seems to be to aid and abet a Tory cover-up. But, luckily, Brian Mulroney won't let it happen. Harper's dissed him and now he's feeling vindictive. He wants a full inquiry and nothing less will do. And when Mulroney perceives a slight, he never, ever lets it go. By the end of this affair Conservatives will hate him as much as everyone else.

Posted by bigcitylib at 3:12 PM


What did Dion know, when did he know it and why is he covering it up ??

What? The inquiry's over already?

Maybe he should text his questions to the House during QP and have Iggy read them out.

Or maybe he could read them in his mother tongue and the rest of you could avail yourselves of that expensive translation we all pay for.

We already hate Mulroney. Where do you think Reform came from? From committed Mulroney-haters that's who. We were willing to play nice with him until he started (once again) causing problems for us. The difference is now he's not running the party anymore, so he can be cut loose without forming a new protest movement again. The merger is pretty cool that way.

That is a hoot.

What is at issue is not who had contact with Mr. Schreiber. It is what did the Harper government do with that letter that set this whole chain of events into motion.

Let's see. Mr. Dion received the very same letter that Mr. Schreiber sent to Mr. Harper on November 1. What did he do? He forwarded it to the RCMP.

What did Mr. Harper do with it when he received that letter 7 MONTHS ago. He sat on it.

Pansy, considering the content of that letter do you not think that Mr. Harper, or at least someone in his government, should have done something with it besides just sit on it until they got caught doing so?

Do you not think that the content of that letter would have caused someone in the Justice Department to at least look at the settlement to Mr. Mulroney a decade ago?

Of course not. Like all Conservatives you talk a good game about accountability and government ethics but when the chips are down you all make Alphonse Gagliano look like a freaking saint.

Incidentally knb, we do not need to have a public inquiry tell us why the Harper government sat on this letter. They received it seven months ago, which means they received it as they were ramping up for a spring election. Doing something with that letter at that time would have thrown a very large monkey wrench into those plans.

Their plan was to have and win an election and then action the letter. Unfortunately, they had to postpone the election and actioning the letter then would have led to too many awkward questions, so they sat on it hoping it would quietly go away.

The proper phrase for that is cover-up and as cover-ups go it is pretty small potatoes. However, when a government wins an election on a platform claiming they would not do such things any cover-up, no matter how small, is significant.

I love how Cons like RR refer to themselves as *we* when they were still at their mother's teat (or, more likely, incubating in a pod somewhere) when the rump of conservatives ditched Mulroney to become Reform.

"However, when a government wins an election on a platform claiming they would not do such things any cover-up, no matter how small, is significant."

You're right. I'm outraged. Wait a minute ... no, I'm not. So much talking and all you've stated is that the PMO should be wasting its time looking into the dubious confessions of Schreiber. A man who's a known liar and trying above all else to avoid being deported.

Yawn ... wake me up when you Liberals dig up a real scandal or finally decide to put together a viable alternative to this government.

Oh, keep going, please. I hang on every word you say. Every phrase, every utterance is just so relevant, so.... meaningful.

I swear, if you actually contributed to a debate, just once, I'd fall off my chair.

Don't laugh so fast at the first commenter.

There were indeed high level contacts going on.

Add to the fact that Dion and Schrieber are now pretty much acting in concert, and presto, you have the Liberal party attempting to leverage the works of a criminal for their own petty partisan purposes.

I swear, if you actually contributed to a debate, just once, I'd fall off my chair.

...about the only exercise your fat-ass would ever get, I should imagine.

Face it...you were shittng in your diaper during the Mulroney years, so don't try and claim any responsibility for tossing the Old Whore overboard. It is really grandiose.

How many times at bat do you losers want on this thing? Should we keep opening up the Human Resources debacle, ADSCAM, et al for eternity?

Should we keep opening up the Human Resources debacle, ADSCAM, et al for eternity?

I hadn't realised the Conservatives had closed those files. They bring them up every two days, after all.

I can't believe Mr. Control wouldn't be firing people who didn't let him know about the letter - he hasn't fired anyone, I think he knew about it.

Bitch, bicth about it being 14 years ago, but hey, it's okay to dwell on sponsorship which was 12 years ago - DOUBLE-STANDARD CPC's or what.

Dion and his cabinet members DID NOT meet with Schreiber you fool. Only one person did and he's been totally open about it becuase he has nothing to hide.

Picture this, man about to be booted out of the country in 10 days. Pen in hand, writes up yet another sworn affidavit, this time about afew high ranking Liberals.
Could new info 'urge' PMSH to keep the Spy in Canada?

You have a rich fantasy live, Wilson.

As we have stated with other media representatives, the Privy Council Office processes all incoming correspondence to the prime minister. In the case of correspondence from Karlheinz Schreiber, it was decided that replying would be inappropriate as a result of the author being the subject of an extradition hearing, as well as his involvement in other litigation.


Email to a friend