Its Friday, Do You Know Where Your Prime Minister Is? 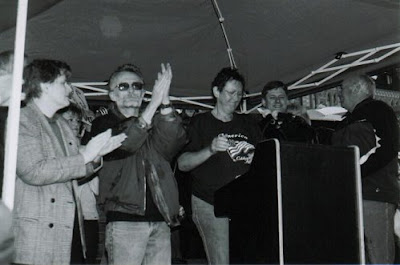 Here's a shot of him hanging with far right extremists Connie and Mark Fournier of Free Dominion fame. This picture was taken in late March of 2003, before Connie and Mark had taken up defending the Nazi cause. They were all smiles at the start of the Iraq War, which was supposed to dismantle Saddam's nuclear program and free a bunch of little brown-skinned people over there in Asia or wherever.

These days I imagine if Mr. Harper saw Connie and Mark he would flee at the sight. As Prime Minister, he seems to have taken the same advice my mother always gave me: at least you could try and act normal.

Context for picture is here.

Posted by bigcitylib at 8:18 AM

From what event was this? And who's that crack addict beside her?

An event in late March '03 to show the Americans that at least a few Canadians supported their invasion. Link added to main post.

Well, as they say about Iraq: "The Rightwingers were wrong for all the right reasons, whereas as everyone else was right for the wrong reasons." There's something in the Bible that relates to that...

I hope the Americans will spare some time at some point to blame their Canadian enablers.. That would be such fun...no one does vilification like they do.

Try to think back to that time; people could conclude very little based on the information we were receiving (much of which has been expossed as outright fabrication since). I don't fault anyone who supported the invasion based on a good faith analysis of the information they had (although I'd be tearing them new ones now if Canada had joined in the clusterfuck). But the Harpies didn't do that...they vilified the Government, and by extension, Canadians who supported its position.

I'm surprised they're getting away with this, but that really is a result of the corporate media not wanting to bring up the issue of its most criminally disastrous performance in decades.

Ignatieff was still at Harvard at the time, referring to Americans as *we.*

By the way, BCL...check out Buckdog's post on neo-nazi Terry Tremaine.

Do you even have to google "Free Dominion" and "Tremaine" to find out if he was defended there?

Yeah, I read the Tremaine thing. I wonder if he's ever posted to FreeD.

It's not about the war... it's about the long-standing ties between people at the highest levels of the Conservative Party and Connie Wilkins/Fournier and Mark Fournier - and their curious reluctance to come to their defense.

BTW, BCL... I hope you archived that thread you linked to. Connie has a little habit of deleting inconvenient threads.

I'm not sure I see the point in chasing these small fry though.

Chasing them, maybe. Put paying attention to just who these free speech warriors are defending and who they're ignoring is significant.

In any case, we're cracking down on the ability of Islamofascists to organise and network online...I see no problem taking that same approach with our own, home-grown and culturally-entrenched tradition of fascism.


Speaking on January 9 following a meeting with US Defense Secretary Donald Rumsfeld, Canadian Defence Minister John McCallum said, “If ... the Security Council authorizes the use of force ... then Canada will definitely be part of that military group.”

Asked if Canada would also join a US-led invasion of Iraq if UN authorization was not forthcoming, McCallum said, “Some may say, ‘We’re doing it only with a UN mandate.’ We’re saying we much prefer that, but we may do it otherwise.... If the situation is grey or murky, we reserve the right to make our decision at that time.”

C'mon, Dante...don't get all disingenuous and academic with me:

"Asked if Canada would also join a US-led invasion of Iraq if UN authorization was not forthcoming, McCallum said, “Some may say, ‘We’re doing it only with a UN mandate.’ We’re saying we much prefer that, but we may do it otherwise.... If the situation is grey or murky, we reserve the right to make our decision at that time.”

That's pretty much how non-ideologues decide on actions they will or may take.

A stated preference with nuance is not what you claimed. Relative to factual reality, what you asserted:

"The Liberal Party supported the war until the last minute."

I wish people would simply accept the state of not being fully informed and would choose to remedy that, as opposed to looking for ways to play that down. It's such a waste of time.

And just what are you doing referencing information from the commie International Committee for the Fourth International anyway? Do you want the CPC to denounce you?

Oh my, a big secret; Harper supported the U.S. over Iraq. Wow. Yawn.

Even you Ti-Guy can see through the intent. They were leaning until the polls showed them differently.

For the record, I was against an invasion but the Liberals were hedging with their weasel words. I learned my lesson from the bullshit propagated about Kosovo before that attack. NEVER believe absolutely in any media story.

They even allowed exchange soldiers to go and fight on top of the logistical naval support they provided.

As for the Commies, I monitor them regularly for the purpose of rounding them up when the time comes :-)

Harper really should be more careful when he chooses friends. I bet he's lonely because he's so miserable.

Who cares when about the war in Iraq - it's the final decision that counts.

"They were leaning until the polls showed them differently."

And until it became clear that the evidence for WMD was all crap.

Face it, the CPoC and Harper wer all for a disastrous war. And their predeccessors were against the war agaisnt Serbia, which went off without a hitch.

Liberals were hedging with their weasel words.

What would you have done if the shrieking increased to a deafening roar (the Right, the corporate media, the American ambassador at the time, etc. etc.) if you had to stake out a position, based on the information you have, that you know some people really, really hate?

I was against the invasion as well, not based on what the Liberals were saying but by paying attention to those people who were making the case and noting how flimsy the evidence was. And whenever I remarked on that, the vilification (Saddam-lover! Hippie! Appeaser!) was astonishing.

Christ...even when the Liberals made the right decision when it really counted, the Right continues to bitch about it.

Were Canada stuck in the quagmire now, they'd be blaming the Liberals.

I have to wonder; was Harper stupid enough to believe the Bush/Cheney lies about WMD's at the time? Or is he so evil that he supported their war based on a lie?

" Its Friday, Do You Know Where Your Prime Minister Is?"

On CTV giving a hell of a speech.

Thirty seven billion dollars in debt repayment by March 31. I pity the fool who has to run against such a fiscal track record. Please, drop that writ.

Biff has been waiting for days for BCL to turn "comment moderation" off.

...and after all that time, all we get is a Harpergasm?

WOW can you ever take something out of context and twist it.

Oh come on now. We give you your raison d'etre.

The cons are only partial responsible for leaving out data.

They haven't learned to read a complete sentence much less absorb it.

Your "word verification" just called me a fag. Can I sue?

That's the last time I buy any of his albums! Damn the man to hell.