Will Your SexBot Fake Its Orgasm? 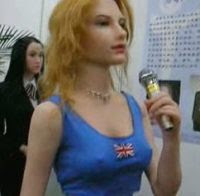 If you're younger than 35, you'll probably live long enough to put David Levy's prediction to the test. Levy says that by 2050 we'll be creating robots so lifelike, so imbued with human-seeming intelligence and emotions, as to be nearly indistinguishable from real people. And we'll have sex with these robots. Some of us will even marry them. And it will all be good.
If you are familiar with the name, its because Mr. Levy is a well known English chess player. But, you might ask, is it possible to make a robot that will really love you? Mr. Levy's experience with Chess leads him to conclude that it doesn't matter.
"I take a pragmatic point of view," he said, "partly because in my original field, computer chess, that was how the problem was solved." Not by making machines that thought like chess masters but by making machines that beat chess masters. Similarly, Levy thinks, robots need only "simulate" human intelligence and emotions "to the point that they are absolutely convincing." If you can't tell whether the thing is man or machine, what difference does it make? You'll treat it as if it were alive. The rest is philosophical hairsplitting.
Well, actually this last bit is a contentious assertion. Philosopher John Searle, with his Chinese Room thought experiment, has argued that a perfect simulation of human behavior does not give the robot an essential Humanity. On the other hand, Putnam (I think) has claimed that if you do not treat this kind of machine as human, it's a form of bigotry based merely on what is inside the brain case.
I have no opinion on this question; I just like the idea of a slutty robot. Too bad I'll probably be dead before their put into mass production.

"All we need now is a few teeth and some toenails and we'll be ready for our date. Al-right!"

Do you think having sex with one of these would be a violation of the DCMA?

No it would not be a violation. Unless you lent it to your friends at a party.

The Pope will of course condemn having sex with robots.

But he'll condemn having sex with same-sex robots more.

The big question is - which will be worse to the wingnuts - a man having sex with a real man or a fake woman?

Implicit in Levy's speculation is the absence of negative feedback loops. There's some pretty cool software getting written these days. The bad news is that its being done by shady DARPA type orgs. In light of this, the window of opportunity for humanity to get its shit together is getting pretty fucking small.

Never mind sex. Work on a robot that'll cook, clean the house, mow the lawn and shovel the walk.

I'm sure your's will.

Well, if nothing else they did an outSTANDing job on the breasts!

Reminds me of the famous joke:

Q: How can you tell if a woman is faking an orgasm?
A: Who cares?

Sisters and gfs have gotten very huffy when told that joke. Hmmm...wimmen. No sense of humor.