Canadian Hindu Advocacy Kicks Teh Crazy Up A Notch

A few weeks back, Queen's Parked hosted Toronto's annual Al Quds day event.  This is where a bunch of middle eastern types get together and protest the Israeli occupation of Palestine, wave signs, and chant "Death to...!" various nations.  In the past, some of the speakers may or may not have strayed over the line into overt antisemitism, but this year the attendees kept it relatively clean. In fact, if you click through the link above, it was the pro-Israeli counter protests who seemed  unable to restrain themselves.  Certainly, they were the ones who had most run-ins with the nice policemen providing event security.

One of the folks arrested was a Jewish fellow named Alan Einstoss, who showed up with his 165 lb bull mastiff and led it into the (mostly Muslim) crowd, insisting on his right (as a Canadian dammit!) to walk his humongous dog wherever he damn well pleased.  Of course the police stepped in and hauled him away, but not before some alleged pushing and shoving took place and not before the dog, who really does seem to be a gentle creature, allegedly got kicked.  I say allegedly, because I am not sure I see anything that is clearly a push or a kick on the vid through the link.

What is clear, though, is that this alleged outrage against Canadian dogdom must be avenged (or the terrorists have already won!), and who but Ron Banerjee and Canadian Hindu Advocacy have stepped in to do the avenging:

...in response, a group called Hindu Canadian Advocacy, (a group with two known members, Ron Banerjee and Dharminder Kumar, who both maybe one in the same person) are organizing on Facebook a “walk your dog in front of the mosque day,” to be held on September 14th, in front of the Salahuddin Mosque on 741 Kennedy Road, between 4:30pm and 7:30pm.

I don't how they picked their mosque.  Maybe randomly.  Or maybe Ron is travelling exclusively by public transit these days and needed  a place close to a major bus line.  Again, I don't know.  In any case, the event facebook page  indicates that about 250 people plan to attend, and the mosque administrator has indicated that he may ask for government protection.  Also worth noting: the lads from Stormfront may send a contingent: 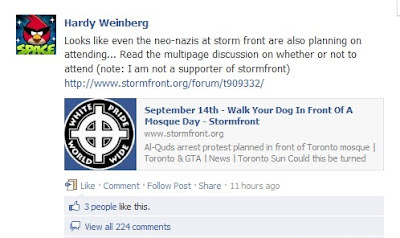 So just a quick note to Ron and Dharminder: if you see some pasty-faced bald dudes in leather outside the mosque, they're not going to be able to tell the difference between you and the Muslims. And even if you explain that you're Hindu, they won't get the distinction.

If there is anything mildly encouraging to say about all this, its that the Canadian wing of the Jewish Defence League seems to be staying clear.  Let's hope Meir and the gang find something better to confront that day.

Oh for Pete's sake! Give fluffy a bath, dress her up with her best collar and go! But take some plastic bags for the poo.

Actually I think that this whole dog walk idea is .... STOOOPID. If it's just supposed to offend Muslims because dogs are "haraam," then it's just plain un - neighbourly & not helpful of anything.