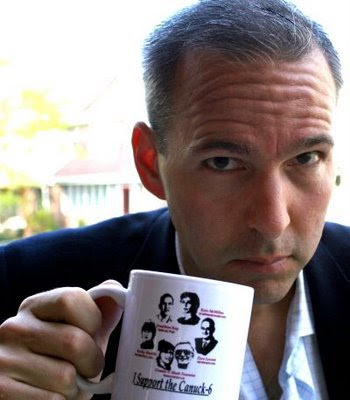 This is a picture of the National Post's Jonathon Kay.  I know its hard to look at, but bear with me.  Note the cup he's holding.  It's demonstrates solidarity with the "Canuck 6" a collection of far-right bloggers that Richard Warman sued several years back (and is suing still, because that's how slowly the wheels turn) for defamation, in part because they reproduced a column Kay wrote, and then pulled down, and which the Post quickly issued a grovelling apology over.   Note the two folks bottom right: they are Mark and Connie Fournier of Free Dominion.  Troll over there this morning and you see the headline: National Post teams up w/ Warman, sues Free Dominion.  And there's this: 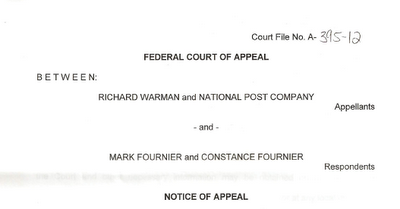 The case itself is interesting.  Free Dominion reproduced Kay's column, but during his action(s) against the NP, Warman got hold of the copyright and demanded Mark and Connie pull it down.  Connie and Mark responded by re-cutting and summarizing the original so they could use it via an appeal to  "fair dealing" , and a federal court accepted their  reworked version.  Geist's take on that decision, which is being appealed in the legal documents linked to above, can be found here.  The result will have some import on on-line behavior going forward, as it will help determine how much of a column, for example, can be quoted before copyright is infringed.

I usually cheer for Richard in these cases, though here I cannot even pretend enough knowledge of the law in question to offer a guess as to how things will turn out.  But BOY!! what about that National Post and their commitment to Free Speech, to the bloggers that got sued for referencing their publication?  When the going got tough, the NP got going...fleeing that is, hiding in the grass, grovelling and begging, abasing themselves mightily,  promising to raise their children as good Muslims, follow sharia law and take up the veil!  (Note: I'm just kidding about that last bit, but I bet they would have if Warman had demanded it!)

Never rely on what a newspaper tells you.  Never believe them when they say they're prepared to go to the wall with you and for you.  In the end, you will always be on your own.

Hasn't there been an ownership change at PostMedia since this started?