FreeD Vs. Warman: The Obvious Occurs

Free Dominion is ordered to turn over IP addresses for the "anonymous eight", an octet of true Conservatives so committed to the principles of Free Speech that they are willing to hide behind pseudonyms in order to slander Richard Warman.

The most important bit of the ruling is here. Warman gets access to 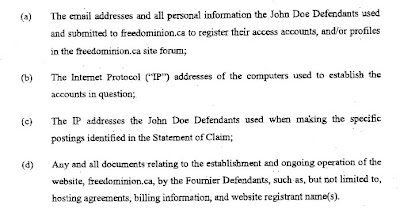 Now, Connie claims that:
For well over a year, the IP address information on every post has recorded the same number: 127.0.0.1

...and I'm not sure if year old IPs will help much in establishing the anonys' identity (though a few cases this can be figured out from strictly on-line sources). It occurs to me, however, that a number of these people claim to have contributed to the FreeD defense fund, and if the Fourniers are required to turn over billing details of these transactions, then that should seal the deal.

In the case before the court, we are dealing with an anti-hate speech advocate and Defendants whose website is so controversial that it is blocked to employees of the Ontario Public Service.

Finally, none of this should have come as a surprise to anyone that's been paying attenion. As Judge Kershman wrote:

The fact that they're all sitting there stunned at FreeD speaks to a wilful ignorance of Canadian law and, since Connie and Mark are receiving paid/professional legal advice, speaks I think to the fact that they are playing forum members for saps.

PS. The Fourniers got dinged $5,000 by the judge for forcing this whole silly motion and hearing in the first place.

I don't know that your last assertion is necessarily true. There seems to be a record here of Connie and Mark being played for saps by the likes of Mark Lemire and similar people. And they've chosen a lawyer known for her association with Nazi causes.

Clearly an intelligent person on the receiving end of a lawsuit from Warman and Kinsella would, if they wanted any hope of prevailing, avoid these people like the plague and seek help exclusively from those on the respectable side of the free speech movement.

I've not seen any indication, throughout this whole affair, of intelligent or rational thought on their part. At every stage, when a decision could be made to help or hurt their own cause, they've chosen to hurt it.

RB, they had another lawyer for awhile (can't remember name), but they parted ways.

I think there's disingenuousness all up and down the line, but it is hard to imagine ANY lawyer telling them that they had any real hope in opposing this motion.

...or that this silly "we sold it to the Panamanians" scheme would afford them any protection.

127.0.0.1 refers to the local machine (i.e. the PC the user is currently using).However, as this is a reserved IP address (all PCs use this address for various means), this is not her correct IP address. Also, IP addresses are unique, therefore, no 2 users can have and use the same IP address concurrently, Moreover, if they have been using the same Internet Service Provider for the last year, it's unlikely their IP addresses would have changed or changed significantly.

This has gotten so pathetic I'm almost feeling sorry for FreeD. Almost.

They should have understood their liability (moral and legal) ages ago. But then, I don't think Fournier/Wilkins even remember why they set up FreeDominion.

Yes, I remember that. I looked him up and couldn't find any indication that he had any experience in this area of litigation. I can't imagine any lawyer not personally committed to the "cause" being willing to take on clients whose ability to pay is questionable and whose willingness to co-operate in limiting potential damages is non-existent.

While it's purely speculation on my part, I imagine he likely told them to settle or at least behave or he wouldn't be able to continue representing them.

(Previous post was in reply to BCL. It makes no sense as a reply to Ti-Guy)

I tried to warn the Fourniers over at the Western Standard that they were getting shitty legal advice, if their lawyer is allowing them to continue making remarks about the whole situation. No good lawyer would do that unless the lawyer was willing to vet whatever they published first to ensure it wasn't actionable. I told them that ever post they make can and probably will be used against them in a paper war that will ultimately bankrupt them.

Clearly... my assessments about then quality of ther legal advice are more true than I realized.

PS -- I know that I take shit as a blogger for moderating all comments that appear on my blog. I had a sense (after the SLAPP suit against me) that this (the ultimate ruling here) was the way it was going to go down.

Nobody was willing to listen to me (if I recall) and some chastized me for wanting to *shut down* the free-wheeling aspect of blogging..

From what I see regularly posted by nyms and real people alike- Blogs can end up being little more than libel factories... and whether we like it or not -- if we allow people to post stuff that is libelous, we will be called to account for it.

I think that intent would count for a lot in these cases.

If I were to say something libellous here, it was brought to BCL's attention and he took appropriate action, I can't see him being liable. In FD's case they went out of their way not only to enable libellous statements, but to encourage them and refuse to take action.

Basically their actions are like a bank robber claiming there's nothing wrong with his actions. Not likely to succeed in court, but certain to win praise and admiration from all those who consider bank robbery a noble, woefully misunderstood profession.

I think that intent would count for a lot in these cases.

It certainly does. Motivation is always a huge factor in deciding culpability in cases like this.

I became entirely indifferent to anything these cretinous speech warriors had to say after all the libel started and was accommodated so cheerfully.

I may be mistaken -- but my read on the law is that intent counts when it comes to the decision with respect to malice.

In the case of the litigants in question -- a competent lawyer would tell them after the writ was served that they should NOT post anything on the subject or speak to the media...

a)total incompetence and or inexperience

b)Making sure that her legal fees get paid and the money keeps rolling in... (via fundraising efforts)

c)Drawing out this matter as long as the money will keep coming... the more messages that the Free Dominion posts that are malicious libels - the more evidence he has to bury them in paper - the longer these proceedings last...

In a very small way- I really do feel bad for the Fourniers. They are on the losing end of a bad proposition.