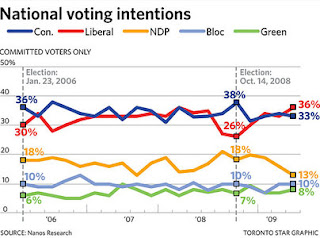 But, until Steve comes along and explains everything, here's my best attempt.

Most important, I have to admit, is the leadership issue. Much as I dislike some of the directions Ignatieff has taken the party, and much as I dislike the guy's personality (as I wade through "Blood and Belonging" I am convinced Iggy must carry a pocket mirror around with him so he can check to see if he's as wonderful today as he was yesterday--I mean how many pictures of the author looking fabulous does one book need?), I have to admit that he is holding down his end of the deal as leader. That is, when he appears on TV he doesn't look like he's about to suddenly break down and cry, you can understand what he's saying, and what he is saying is relatively coherent. (He also has very kingly eye-brows). This is quite different from even a year ago, when I remember JimBobby writing somewhere that he needed to light all of his incense sticks to get Dion to make sense.

And I didn't think it would make much difference, but it clearly has. There are no anonymous Libs peeing in the soup. Any infighting that does exist seems to be staying behind closed doors. Lib partisans (me at least) are not looking forward to the notion of a summer/fall election with a gnawing sense of doom in the pit of their stomachs.

The other thing, too, is: Harper's Torys are out of gas idea-wise and they know it. This seems to be what is behind the recent decision to unmuzzle their MPs. As the economy tanks, Harper doesn't really know what the party line is anymore, so why not let the party define it collectively? Of course, we see where that's got them. Unmuzzled, the Tory idea of governing the nation is to trash Liberal operatives, flirt with Creationism, and hang out with gun nuts.

So, in a couple of ways, the LPoC is in a much better position to let the government defeat itself. Now all that's needed are some decent fund-raising numbers.

His handlers need to put a gizmo under his suit, that zaps him everytime he says "I" during a press conference.

This is probably the best poll we've seen since Harper was first elected.

I predict the fundraising numbers are up for this quarter too :)

Please, BCL. There's nothing more to this issue if you understand that the margin of swing voters consists, generally-speaking, of morons, although the exact mix of idiot-savants, dupes, rubes, and true cretins is not really known.

I can't imagine that, in the space of a few short months, anyone would seriously switch party support unless were talking about those people who aren't exactly well acquainted with reality.

I really detest Iggy, but I'm not switching support, because fundamentally, nothing much has changed.

By the way, I thought you'd have put up a gleeful post celebrating the coming out of one Mr. Kathy Shaidle by now.

I told you retched serfs two years ago this was your ultimate destination.

Ti-Guy, every one else has the SHaidle thing covered. I'd just be repeating.

I am, however, quite gleeful. You're right about that.

"Move the party right ... pick up NDP support." As Nanos indicates, it's disaffected Liberals who are returning to the fold. They were never NDP supporters to begin with. They were the people who answered Layton's "lend me your vote" plea in 2006.

As for the "move the party right" bit, with the LPC having shifted leftward with Dion and many people disturbed by the nature of his leadership, there was no good reason for them to return to the fold. Now, from their POV, there is.

I told you retched serfs two years ago this was your ultimate destination.

That should be "wretched" and "destiny."

Ok, so the LPC is up... why should this make me happy?

"The Liberals... marginally better than Harper." -- seems to be where we are going.

We'll see what happens in an election when the focus shifts from Harper to Ignatieff. I'm with you on not liking Ignatieff's personality. I think when more Canadians actually get to know him they will dislike him too. He just drips arrogance. Its not surprising that the political class--blinded by the glare of his credentials--likes him. Academic worship is a trait of that group.

There were periods during Dion's reign when he posted a few numbers that were on par with Harper. Im still not impressed and if I were still a Liberal I wouldnt be stoked about an election.

My bet is that the next election is still Harper's to lose, but we'll have to see with the economy. If things bounce back Harper will (unfairly) get a lot of the credit. If they dont Harper will(unfairly) shoulder a lot of the blame)

The only thing that has changed is that a majority is absolutely out of the question for Harper. But the flip side of that reality will hurt the Liberals with soft NDP support in the next election.

I dont see a lot that separates the two besides a lesser quantity of knuckle draggers in the Liberal caucus. On most substantive issues--crime, Afghanistan, the best way to deal with the economy--the two are walking in lock step.