Actually, quite likely, esp. if they turn out to be some hithertoo undescribed variety of pinniped which, if you have ever read Heuvelman's classic "In the Wake of the Sea-Serpents", has indeed been suggested for such beasts as Nessie and Ogopogo. 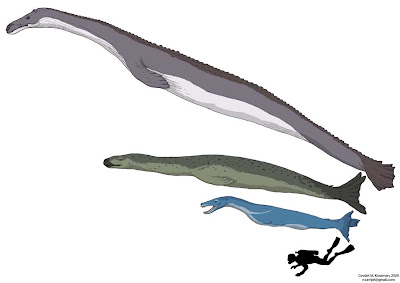 By complete coincidence - honestly! - we looked yesterday at discovery rates among terrestrial mammals. All indications are that many species remain to be discovered. It should also be well known, and I hope it is, that the same is true for large marine vertebrates: recent discoveries, and extrapolations based on discovery rates, indicate that there are still new, large marine animals to find. Today sees the publication of a new paper by myself and two colleagues, Michael Woodley and Hugh Shanahan, in which we attempt to estimate the number of pinnipeds that might remain undiscovered (pinnipeds are the seals, sea lions, and walruses).

Anyway, the cryptozoological literature is full of accounts of weird aquatic creatures, and at least some of these animals sound pinniped-like. In fact it has been speculated by some that certain aquatic cryptids might be undiscovered pinnipeds (Oudemans 1892, Heuvelmans 1968, Costello 1974, Mackal 1983, Cornes 2001, Coleman & Huyghe 2003). What's interesting is that the number of cryptids suggested to be of a pinniped identity is low: as in, around two or three. In other words, the cryptozoological record matches with the extrapolation made from the discovery data. It might seem odd to include a discussion of crypto-pinnipeds in a technical paper, and I know that some people are not going to see this as at all useful. Nevertheless, as we note in the paper, 'the exclusion of many cryptids from the formal literature has prevented technical appraisal. In turn, this has helped perpetuate a cycle in which these alleged creatures remain predominantly in the 'grey literature' and are never really objectively assessed' (Woodley et al. 2009, p. 5).

One fascinating element to this story is that the notion of a "long necked seal" has not always been confined to the cryptozoological "grey" literature. In "A dissertation upon the Class of the Phocae Marinae", from 1751, James Parson's wrote:

'[M]uch slenderer than either of the former [two other pinnipeds were described earlier in the manuscript]; but that, wherein he principally differs, is the length of his neck; for from his nose-end to his fore-feet, and from thence to his tail, are the same measure; as also in that, instead of his fore-feet, he hath rather fins; not having any claws thereon, as have the other kinds. The head and neck of this species are exactly like those of an otter. One of those, which is also now in our musaeum [sic], taken notice of by the same author, has an head shaped like that of a tortoise; less in proportion than that of every other species, with a narrowness of stricture round the neck: the fore-feet of these are five-finger'd, with nails, like the common seal. Their size, as to the utmost growth of an adult, is also very different. That before described, was 7 feet and an half in length; and, being very young, had scarce any teeth at all' (Parsons 1751, p. 111). 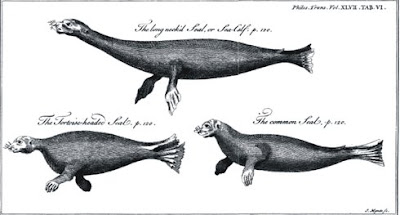 And here is the beast illustrated.

h/t Cryptomundo, which has even more information on the upcoming Naish et al paper.

Posted by bigcitylib at 5:09 AM

You have the best two blog posts of the morning, imho. Thanks for digging this out.

Nessie has been debunked a zillion times. There are no large monsters in Loch Ness. Even the guy who made those old original photographs has said it was a hoax.

Do large-ish undiscovered critters exist in the ocean? could be... but not in Ness and not in BC.

Maybe Caddy, off the B.C. coast.