Not only has this news not received much reporting, but the fact that ice sensors in the North have been malfunctioning, which has very likely led to a further underestimating of the amount of ice around the pole.

"Very likely"? Well, there's no reason to speculate: the sensors in the North are back up and running: 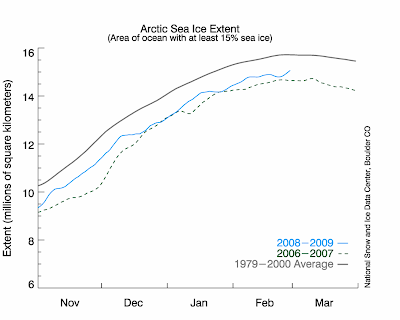 ...and they still show ice-extent way under the long-term average, and bouncing around the record lows of 2006-2007.

Posted by bigcitylib at 9:30 AM

Typical Grunter. Seize on a reported fact and then dress it up in a splendid outfit of hyperbole and fantasy. I hope CanWest takes him down with it.

CanWest hit 29 cents today before "rallying" back to 34.