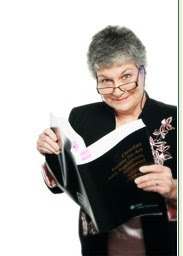 When word of the bogus embezzlement charges against Bill Casey first came to light, it was discovered that the woman behind them was Tory operative Diana Read-Miedema. As the resultant outrage spread, Ms. Miedema quickly removed herself and her many, many websites from cyberspace.

Well, perhaps things have blown over, because the site devoted to Ms. Miedema's accounting business, Simply Financials, is back on-line.
Unfortunately, most of her more religious based sites are still down, but this one remains and it begs the question: what the hell is a soaking prayer?
And another question that begs asking: is Ms. Miedema still official agent for the Conservative riding association in Cumberland-Colchester-Musquodoboit Valley?
She shouldn't be.

Posted by bigcitylib at 5:01 AM

On soaking prayer, could it involve praying for rain?