Mann Vs. Steyn: Mann Takes A Round

In October of last year, climate scientist Michael Mann filed suit against Mark Steyn and the National Review for a piece Steyn wrote in that publication, and against  the Competitive Enterprise Institute for a  piece that appeared earlier on its blog.  The articles in question described Mann's hockey stick graph, his reconstruction of pre-instrument  temperature records, as "fraudulent" and his work in general as "bogus", so Mann's angry response isn't surprising.

The NR and the CEI filed motions to dismiss on the grounds that their statements are protected speech under the First Amendment, mere “opinion,” “rhetorical hyperbole,” or “fair comment.”.  They also argued that Mann's action was a SLAPP suit.  At the time I wrote:

Frankly, I know of nowhere that a reader, be they careful or careless, could interpret the term "fraudulent" when applied to a scientist's work as implying anything less than that they were guilty of scientific misconduct (the kind of thing they discuss here) or straight out fraud.  I am unaware of any place the term has been used  merely to state that the scientist's work is incorrect. This is quite a bit different than the situation with "blackmail", where there is an established colloquial sense that is weaker than the more precise legal sense (the colloquial sense does not entail criminality where the more legal sense does).

The court has now ruled that the Mann action did not constitute a SLAPP suit; these are typically launched by large corporate entities against individuals, and this case did not fit that description.  And they rejected the First Amendment arguments for reasons that echo my earlier remarks:

“Given the dictionary definition as well as the common readers’ thought about the use of these words (fraud and fraudulent) the Court finds that these statement taken in context must be viewed as more than honest commentary—particularly when investigations have found otherwise. Considering the numerous articles that characterize Plaintiff’s work as fraudulent, combined with the assertions of fraud and data manipulation, the CEI Defendants have essentially made conclusions based on facts.” [at 15]

The definition of “bogus” in the Merriam-Webster online dictionary, inter alia, is “not genuine . . . sham.” BOGUS, MERRIAM-WEBSTER: ONLINE DICTIONARY AND THESAURUS, http://www.merriam-webster.dictionary/bogus.com/  In Plaintiff’s line of work, such an accusation is serious. To call his work a sham or to question his intellect and reasoning is tantamount to an accusation of fraud (taken in the context and knowing that Plaintiff’s work has been investigated and substantiated on numerous occasions).”

So the NR and CEI articles were not opinion, but (mis)statements of fact.  Mann's suits can go forward.

Although they are far from won.  The court docs note, in regards to the National Review case, how difficult actual malice can be to prove under U.S. law. Nevertheless 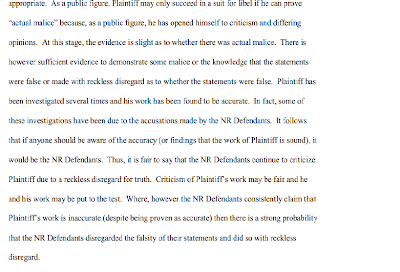 Some ways to go, then, but a real possibility that Steyn and NR will be out a pantsful of money when this is all over.  A fate richly deserved, IMHO.  And in the case of the CEI, the judge's ruling (not quoted above) suggests that Mann probably will be able to show actual malice.  So they are in even deeper trouble.

PS.  As usual, the court docs are easier to read when you click on the image.

Have a look at this excellent essay that pretty much sums it all up;

Get out the butter, Mann is toast.

Well, I suppose unsubstantiated rants are still, technically, essays, but...

If you are making an argument of fact, then the least I would expect are some corroborating links, but the only reference in the whole screed was to Benny Hill.

That kind of sums up the "excellence" of that essay for me.

Even if not sufficient evidence of malice, discovery is almost certain to turn up all sorts of interesting material, e.g. funding received in exchange for attacks on climate science. OTOH I wouldn't put it past NR and CEI to pre-emptively destroy records.

Well, harebell, let's have all those scientific links to your version of the facts. It's the alarmists that want to try to convince us all of this eminent catastrophe, I'd like some verifiable facts, not policy based evidence , but real facts. To date Micheal Mann has not provided any substantiated facts ( discovery is going to be real fun, can't wait for that!) that can be re-tested and is basically hiding out under the same academic umbrella ( Penn State) that sheltered James Sandusky. Nuff said

Or, Paul, you could just read what the judge said.

I was not aware the judge was an accredited climate scientist. If you want to say Mann's work was found to be accurate on the premise of garbage in , garbage out, then yes his work is accurate. Whether any of Mann's work meets any kind of scientific competence,well Steve McIntyre took care of that detail and that is the premise of why Mann is running about sueing everyone and generally having a hissy fit. The jig is up for this 4th line dendrocronologist.

Mann has been cleared time and again by actual scientists. The clowns at the NRO are pushing a political agenda and Steyn and his editorial colleagues are hacks of the most prominent kind.
The judge recognised that those so-called journalists should have known that they were defaming a person because of their history in this area.
Unscientific and slanderous and you ask for more evidence. There's none so blind as those that will not see. Paul you are a cult member and there is no point in engaging in sensible dialogue with you because your mind is made up.

I've read the code, and I think if McIntyre were an academic ... well he wouldn't be any more.

glad some of the scientific community is getting tough with these asshats. Seriously slays me when folks keep posting non peerreviewed crap as the truth, (or as stunning revelations, but its more of the same recycled lies and cherrypicked BS)
yet in the same breath deny any peer reviewed material, as the scientists are part of a profit making conspiracy or just in general, hacks. Its soo ironic it hurts. They expect the scientists who are trained in scientific methods to be 100% but the deniers can say, do or write whatever hyperbolic crackpot theories they want, without proof. So I hope the judge goes at these bastards hard and sets an example, might quell the crackpot gang's roars a bit:P( all 5 of them:P)

The fact that I'm capable of reading both sides of the debate. When I was in Northern Manitoba, while timber cruising, we sampled more trees/ha. for volume estimates for each stand of trees,than Mann used to conjure up a climate reconstruction for the entire world. Even in Briffa et al 2013 conceded that samples taken from the root collar of trees instead of say DBH were predujicial. The statistical aspect is up for debate, but the sample size and methodology used isn't. It was lousy.
If the fact that I read all perspectives makes me part of a cult, so be it. My mind is never "made up" until I see a preponderance of evidence and even still I'm open to have my mind changed. But when I hear that the science is settled, there's a lot more to the story and the ongoing deconstructions of the alarmists assertions are such proof. I would encourage you to read all sides and not be so dismissive to the point of having the blinders on.

The information there is interesting to say the least. Got the raisins to read it?

I actually read that drivel at Forbes. Mr. Bell manages to regurgitate just about any and all climate denial memes I have heard applied to Mann.

An outstanding piece of writing. Certainly up there with Pointman's.

BTW somehow I expect that it's easy to trip over live trees than find 1000 year old dead ones : How many 1000 year old trees did you tally?

@jrkrideau
We weren't there trying to come up with ways to fit a narrative. Even McIntyre concedes that's (Yamal)the best area to make a reconstruction. How much do any of you have in terms of environmental science? Do any of you know what Forest Mensuration and Dendrology is? No going to Google now.
Forbes article is drivel ,eh? I'm sure the editors have taken note of your opinion and have commenced termination of Larry Bell forthwith.
Sheesh.....

History is a better teacher than psuedo-scientific propaganda called global warming, reintroduced with a new name "climate change" to mask its basis of hucksterism.

Set the hypotheses, construct the variables to get the outcome, run it through a front-end scalar model to modify to test code efficiency, create vectoring capability using Cray supercomputer to reach modeling of the desired output, and benchmark it to spec of desired results, produce global warming report, all fictitious.