Saved By The Shell! Ostrander Point Wind Project Cancelled Due To Presence Of Endangered Turtle!!!!

The  Ostander Point Wind Project has been revoked because:

... the roads systems and construction [necessary for the project] would cause serious and irreversible harm to the Blanding’s Turtle and that the proposed mitigation plans were insufficient to protect the endangered species.

Below the document are excerpts in regards to each of these issues: 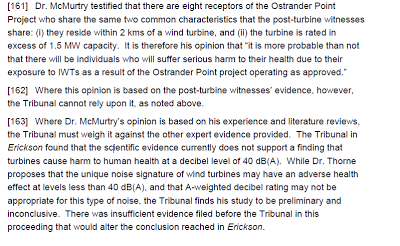 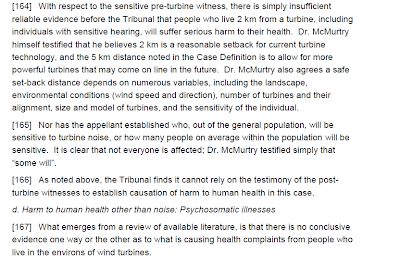 I think the appellants felt that this was their strongest card.   After all Ontario Environmental Commissioner Gord Miller had argued against allowing wind-farms in important bird areas.  However, after much testimony and counter-testimony, the tribunal saw things differently:

I'm not particularly surprised by this aspect of the ruling.  Most ornithologists, when asked to rank causes behind the decline in NA bird populations over the past several decades, wouldn't even put wind farms on their top ten list.  In fact, if people really wanted to make a difference re saving endangered bird species they'd kill their pet cat (in particular if its an outdoor cat); each of these vicious little bastards kill about as many birds per year as an average turbine, and they can't heat your house.

This was the most interesting aspect of the decision for me.  As noted, "there is very little scientific research available on the impact of wind turbines on bats, partly because bats are extremely difficult to study." Some highlights of the testimony included: 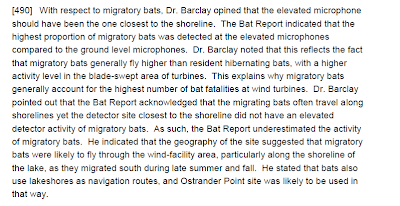 And this, with respect to mitigating the effect of turbines: 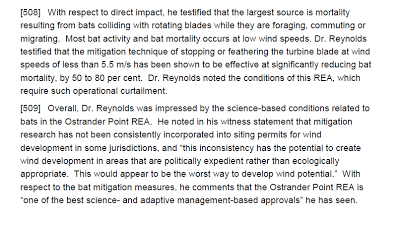 In the end, the Tribunal concluded: 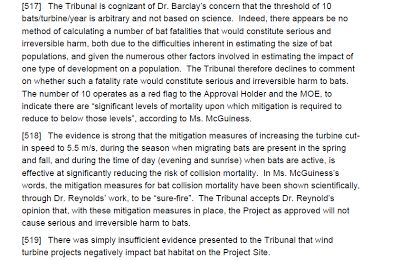 The project was to be located near Prince Edward Point National Wildlife Area, which is a International Monarch Butterfly Reserves.  Concerns were raised that it would negatively impact Monarch populations.  The Tribunal didn't buy it: 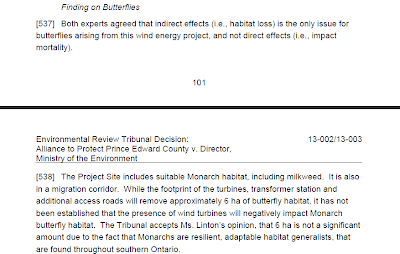 Similarly with the local plant life: the project would not cause “serious and irreversible harm”.  I'm not going to excerpt that bit, because lets face it plants are boring.

And I'll don't think I'll excerpt the bits about Blanding's Turtle either, even though these considerations finally put a stop to the project.  Its important to note, however, that the presence of turbines was not itself an issue.   Rather, the problem lay with a road network that would have been built in order to construct and maintain them.  This network would have been smack dab in the middle of the turtle's habitat; the beasts would have been forced to cross these roads on multiple occasions and at multiple points during their life cycle.  Since the network would have been publicly accessible, more ATV and other traffic would have been drawn to the area.  Furthermore, available mitigation measures were judged ineffective.  Nobody obeys road signs, for example.  And culverts where the turtles might safely cross under the road depend on the species having crossing "hot spots"--preferred road crossing points--where these devices might be installed.  Unfortunately, Blanding's Turtles do not use their habitat in the appropriate manner.

So there you have it.  A win for the anti-windfarm faction, but really more bad than good news in the ruling.  Claims re the negative health effects of turbines continue to gain no traction.  The recent study by Nissenbaum, which garnered so much media attention, is referenced a whole one time in the ruling.  In practical terms it has clearly had no effect on the debate.  Furthermore, the judgement's position re IBA's suggests that turbines can probably operate safely within protected areas.  That's a pretty important point going forward.

Posted by bigcitylib at 9:07 AM

Good assessment. I believe that the Tribunal made some very wise judgements. What this means is that developers need to think harder about how they lay out their road network, especially when working near pristine wetlands. I don't have a problem with that caution even if it stops the odd wind project.