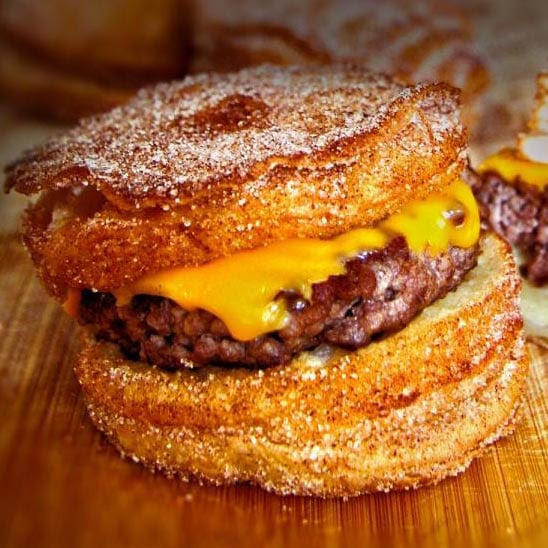 I'm starting to feel a bit sad for Epic Burgers and Waffles, but not at all for the idiots who would attempt to eat one of these things.  Just looking at it, my head starts making whistling noises, and I expect my nutritionist has hung himself out of despair at the state of humanity.

FWIW I think the X went over to the dark side the season they started deep-frying butter. Such things should not be, I felt at the time, and I have seldom gone back since.   And its done nothing but get worse in the meantime. The crap they're serving up this year makes a funnel cake seem like an artifact but a more innocent, low fat time.

The X become the culinary equivalent of Sodom and Gomorrah...bacon and icing sugar lying down together in the streets.  Sat well away from it, children!

Email ThisBlogThis!Share to TwitterShare to FacebookShare to Pinterest
Labels: Cronut-Burger, Depravity, The X

im surprised only a mere hundred fell ill...wtf are people thinking. Its evil in food form:P meat and donut should never be in the same place...on the same day:P