Whither The Green Party Of Canada?

...the local [Green Party] Electoral District associations were largely formed to capitalise on the Revenue Sharing agreements between the Green Party`s head office, and the local electoral units. Any local riding that met the basic criteria of maintaining a local organisation would receive a significant share of the per vote subsidy then on offer under the elections finance act. The central party had a perverse incentive inasmuch as their own revenues would decline every time a new local organisation was formed to take advantage of this revenue sharing deal, so perhaps it ought not surprise us that zero resources were allocated to local organising of grass-roots Green Party riding associations. On the part of the Electoral District Associations, virtually all local ridings that had more than 3 or 4 active members had already formed their EDA before Elizabeth May was elected leader of the GPC. Most of them coasted along under the Revenue sharing agreement, accumulating a small stream of cash for the next general election.

But of course revenue sharing is done, and you can see the result in the chart below: 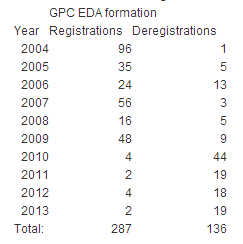 The blogger I swiped all this from thinks there's an opportunity for the LPC in all of this, if the through a few bones to GPC supporters.  One is marijuana legalization/decriminalization, which is now party policy.  The other is a preferential ballot which, I am afraid to say, is probably off the table for the foreseeable future.

Why do you feel that a preferrential ballot is off the table? I'm not doubting that you're right, just curious as to what's led to this circumstance, given that it is Liberal Party policy. Also, as much as I want to disagree with Matthew Day, I think his analysis has some merit for the Liberal Party - as long as Liberals seize on the issue of addressing the democratic deficit. While I would disagree that a Preferrential Ballot would actually do anything like that, I understand that others don't see it that way - hence it would be a very good policy tool to pry voters away from both the Greens and the NDP. So, I'm curious as to why you believe it's off the table.

Well, I was thinking of JT's shoot-down of the idea of cooperation with GPC/NDP here:

..but now that I read it again, Murray wasn't suggesting a preferential ballot at the time, just once-off cooperation.

More generally, though, I don't think anyone in the LPC will seriously consider voting reform if the LPC looks like it can win with the rules as is. Certainly, you don't see any of the pleas for voting reform that you did pre-Trudeau, even from someone like me, who supports it generally speaking. You don't hear the cries for a LPC/NDP merger anymore either, for the same reason.

I thought that the Liberals adopted a policy to support preferential ballots last year? Steve is correct that many GPC supporters would infinitely prefer proportional representation, but even with the softer version of preferential ballots, I think a lot of people from across the political spectrum would gravitate towards the Liberals should they campaign seriously on the issue. The rub is credibility. If there are a host of Lioberals publicly back-pedalling on the issue, then it would be better to simply leave it alone and pursue different policies.