On Poison Rings, Gay Or Otherwise

U.S. evangelical Pat Robertson has been in the news again for suggesting that gay men in San Francisco use "special rings" that they cut your finger with to give you HIV.  The video is below:


We'll assume Pat's crazy.  But what if he wasn't?  A poison ring that leaves a cut on its intended victim seems pretty easily traceable.  It probably wouldn't work more than once or twice.

On the other hand, check out this little number from 14th Century Bulgaria: 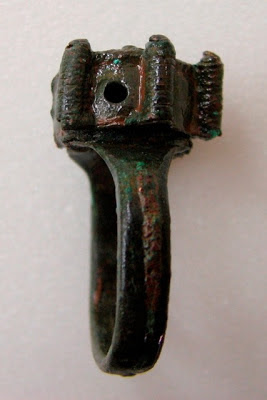 Probably the best explanation of how it functions comes from here:

It’s finely crafted with a circular granulation detail around the top and five cylinders that look like stacked pennies going up the side. There’s a small hole on the side of the ring between two of the cylinders through which poison could be introduced into the hollow chamber and, when the propitious moment is at hand, into the food or beverage of your benighted target.

Its size suggests that it was made for a man to wear, probably on the little finger of the right hand. Since the hole is on the left side, it would be concealed by the ring finger next to it. A quick lift and tip of the pinkie and poisoning accomplished. It’s a much stealthier approach than having to open a splashy begemmed lid and turn your hand upside down without anyone noticing.

So, no mark!  Apparently this ring took down a whole fistful of Bulgarian nobles without anyone being the wiser.  A much better result for the poisoner, whatever their sexual orientation.

I wonder if copyright was really invented to allow people to hide the stupid stuff they say,