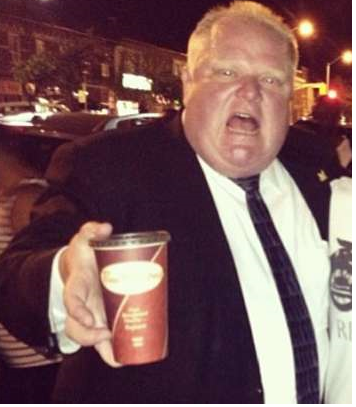 I don't know how this helps their brand.

He doesn't look drunk to me.And if he has a few drinks on a Friday Night Who cares?

A few drinks on a Friday night, in the privacy of his own home... ok. A few drinks on a Friday night, in public, among the citizens he represents not just in your city but beyond it, EVERYONE should care. He's a MAYOR. A public official representing ALL of you. Only Ford Nation can come up with such apologetics. You'd be all over some other other politician behaving the same way. Look at the many videos already online. He's drunk. Moreover, in those videos, look at how the people posing for photos are behaving. it's not admiration, my friend. It's pure ridicule. A photo with RoFo is a badge of honour, because they see him for what he is: a man-child failure of a mayor.

Heh. Is that you, Dougie Ford?

Nope not a member of Ford Nation ,don't even live in Trawna.He is not drunk in my opinion.I think it galls you how much people admire him that's all.Nice use of CAPS though. Have a great day ,I'm heading down there now.

Not focusing on Ford at all, just the idea of having a few drinks. I really have no problems with any elected figure who has a few with his neighbours in a block party or at a street festival even to the point of getting a little inebriated.
The trend towards expecting our politicians to be superhuman is a worrying trend in my eyes. If we want one of us to represent us then we have to accept that they will be as "normal" as us. The trend towards inventing rules about what is appropriate or not is stifling any chance of seeing a normal person in office. The word inappropriate is just another way of saying I don't like it, and frankly is censorship.

That said, if the said elected member has issues with substance abuse then this is plain sad. His family and those who say they care for him should be helping him.

He was clearly gassed or high. He apparently drove there. How did he get home? Why did he offer to hook people up with some blow? Many questions.

I'm in agreement about the quality of Tim's coffee. It's gone downhill for many years it seems. Funny thing is , that even in my small rural town Tim's, the staff is quite diverse. It's too bad they're forced to serve crap now. I prefer the local privately owned shop that even has their own roastery. Other than that, it's Coffee Culture for me.

A few videos were shot:

there is no way that he has straight tims coffee in that cup....nice try Rob, but on the bright side...he seems to be walking ...and thats gotta be good for him:P
and he really isnt doing enough crack:P