...resembles a cross between The Bucket List and what you're likely to see if you've got a back-stage pass to a Rolling Stones Concert. 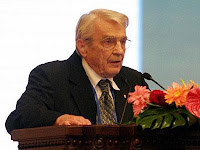 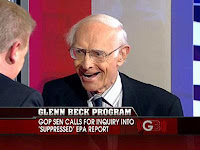 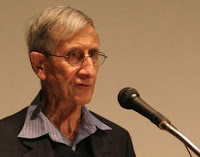 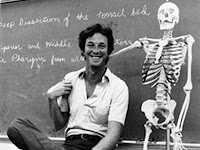 Work your way into the Deniers' 2nd and 3rd lines and, unfortunately, these as well are geezer heavy. We're not being ageist here, for it is not entirely true that science is a "young man's game", but you can pretty much guess the result if you set Tiger Woods head to head against Arnold Palmer.

Posted by bigcitylib at 4:56 AM

My own experience with denialist geezerism is my father-in-law's former executive engineer pal. Over 80 and has all his investments tied up in fossil fuels. I'm convinced it has something to do with end-of-life issues with people who are both bright and well-educated. And engineers...

Speaking to these geezer denialists I'm left with the sense that they can't bear the idea that they were instrumental in AGW, that this should become their legacy. They're acutely aware of Fate's fickle finger pointing in their direction.

It is so funny that the Warmist Cult is dependent on promoting the Big Lie that the natural state of climate is "static.

Now questioning the current science orthodoxy that small changes in a trace gas found in microscopic amounts in the atmosphere, that is quite logical.

Even NOAA is now hedging their bets and "admitting" that the possibility of a long term cooling "Minimum Period" is possible.

I am personally hoping for the next Ice Age to start - we are right on schedule as this current Inter Glacial period is very, very long in the tooth.

The idea of the Toronto under two miles of ice is sooooooooooo appealing. It will clear out the stench of the Liberal capital of Canada and get rid of Miller Mounds of garbage in one fell swoop.

Let's see...the pix given show five doctors from 4 disciplines (nuclear/quantum physics, medicine, geology, economics), a boat load of awards (including one Nobel and one who should have had a Nobel) from Universities that include Harvard, Princeton, and MIT. Sorry, but I take the geezers over the ex-Veep with the .ppt everytime.

Anonymous said...
This comment has been removed by a blog administrator.
10:49 PM