As noted here, July 14th proved to be the warmest day on record, according to data at the UAH website, a website co-authored by none other than Dr. Roy Spencer. Until, it would appear, July 18th: 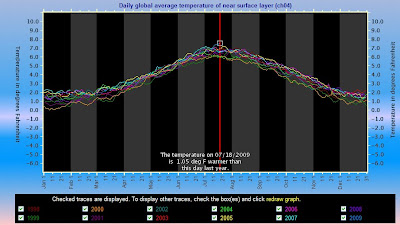 A particularly interesting take on this comes from Roger Pielke Sr. He wrote on July 16th:

This record event is an effective test of two hypotheses.

Hypothesis #1: Roy Spencer’s hypothesis on the role of circulation patterns in global warming (e.g. see) might explain most or all of the current anomaly since it clearly is spatially very variable, and its onset was so sudden. If the lower atmosphere cools again to its long term average or lower, this would support Roy’s viewpoint.

Hypothesis #2: Alternatively, if the large anomaly persists, it will support the claims by the

IPCC and others (e.g. see Cool Spells Normal in Warming World) that well-mixed greenhouse gas warming is the dominate climate forcing in the coming decades and is again causing global warming after the interruption of the last few years.

Only time will tell which is correct, however, we now have short term information to test the two hypotheses. The results of this real world test will certainly influence my viewpoint on climate science.

I guess the question is: how long must we wait for the results of this real world test? At this moment, it seems to be going against Mr. Spencer.

Posted by bigcitylib at 9:23 AM

Anonymous said...
This comment has been removed by a blog administrator.
11:03 AM

"Refuted" by a few days of high temperatures? Have warmers become this desperate? ;)