Diane Ablonczy: I Swear I Thought She Was A Women

From Today's National Post, Diane Ablonczy's guest editorial, which I have reproduced below: 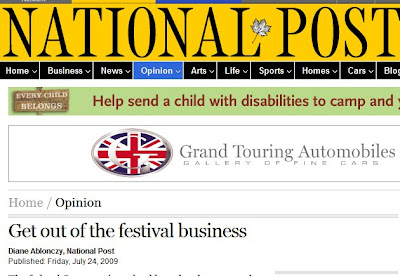 Firstly, it is a good thing that Charles McVety exists, okay? A very good thing! If Charles Mcvety didn't exist, there would be anarchy, a godless darkness filled with men in thongs, singing and dancing and having cuddle parties! Okay? Charles McVety is truly, truly wonderful. Lets get that out of the way. I love you Charles McVety.
2ndly, don't fuck with those rural backbenchers! I've been through that prick Brad Trost's riding many times, and its basically the foothills outside of gooberville. If you took every brain in town and rolled them together it wouldn't make a single moron. So I figured, what the hell? I've worked hard for the party, for the nation--I've worked hard for my jr. Ministry. Handing out tourism pork is supposed to be my gig! But no! They're like the Great Plains Illuminati out there. One word and there's pitchfork hanging out your ass! As happened to me! My own fault, though. I didn't see the signs, didn't obey the rules. So let me make another thing clear: Brad, you are a strong, wise male and I a mere woman with silly pretentions to individual autonomy. You are also a magnificent physical specimen, with an ass that's hard as a rock! All muscle, I swear! You could bounce a marble off that ass! In fact, you are so hot that it makes me wonder if...
But no...no...
And as for that damned picture! Too me that says "full bodied woman", okay? Look at the picture and tell me if it doesn't say "full bodied woman" to you. Canada's big cities, let me tell you, are crawling with "full bodied women".
So by all means lets get Government out of the festival business. Or at least get me out of the festival business. Although, I guess you could say that I am out of the festival business. Not by choice, though! I was rubbed out of the festival business.
(Okay, Stevie, I've said it. Can I have some power back now?)

Posted by bigcitylib at 8:04 AM

BCL, I enjoyed this. But when I got to the actual editorial--well, I think there's a mistake somehwere. I don't believe this was authored by Abloczy. Why would she write of herself in the third person? Why would she criticize the Harper government publicly--a complete non-no?

Something doesn't add up here. I wish it did, though, because you were on fire with that post!

Whose opinion is this? The leader seems to attribute it to Ablonczy -- but if she's the author, why would she refer to herself in the 3rd person? and if she's the author she has committed a clear breach of cabinet solidarity and must resign.

Or is the attribution mistaken?

Dawg, you dog! We wrote almost the same thing. ("Great minds" and all that.)

I don't believe this was authored by Abloczy

It isn't. The National Putz can't do anything right.

Wingnuts write this editorial whenever any minor controversy arises with government: "It's too difficult! The Government should stop doing it all together!" And that's because, for wingnuts, thinking actually hurts.

The National Post screwed up. Its an editorial staff piece. National Newswatch caught it, and as of about ten minutes ago it was corrected. I am merely feasting upon their stupidity.

"Benjamin, Ruth, Hezekiah...come over here and look at this! Glans piercing!"

she remains in such foul odour with her boss that a $270,000 grant to a folk festival in Calgary, Ms. Abonczy's home town and the city she represents, was announced by Ontario MP Tony Clement, the Industry Minister.

So, Tony Clement flew west then east again to announce $27000 for an event in Ablonczy's home city.

And, how much are the taxpayers stuck with for the travel costs and other expenses?