Gary McHale's name comes up a lot when you're reading about the on-going troubles between native and non-native in Caledonia, usually in a negative context, as for example when Northern Alliance Members show up at his rallies. But one of the tactics that McHale and his followers have employed--laying private charges against native protesters, and against OPP officers who have allegedly failed to arrest or in fact aided native protesters--seems to have borne fruit. The full ruling is here, and the money passage below: 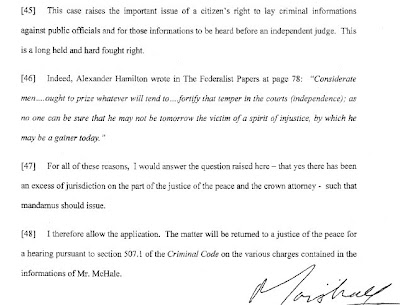 Now, my early morning pre-coffee reading of this ruling suggests it is fairly limited in scope. The police have been telling McHale and co. that, look, these charges are just going to get stayed, so we won't let you lay them in the first place. The judge is saying "no", these are two separate events, and the 2nd (where the charges get stayed) follows the 1st only after a certain amount of processing by the justice system.

So, while the charges McHale files will still get tossed eventually, he will be able to use the justice system to lay a hassle on the police and natives on the other side of the barricades.

Posted by bigcitylib at 7:40 AM

Christ...militia. Draft 'em all and send 'em to Afghanistan if they're so intent on defending something. Besides, boot camp is a great weight loss program and a lard-ass like McHale would certainly benefit from it.

BCL, thank-you for bringing this decision to your readers attention.

While I'm not fully familiar with McHale and his goings-on personally, the decision is incredibly important and, in many respects, more significant that one might at first blush understand.

As a lawyer, I don't often have the opportunity to have pride in the work of our Judiciary. This decision, I have to say, is excellent.

Finally, we see a Court giving respect to the concept that the State is not above the law, and that citizens do have some limited rights to demand accountibility of the Crown.

The point made by the Justice in question is that Parliament has, for many years, maintained the right of private citizens to institute private prosecutions.

The result is that the Crown, the "state", cannot show preference and arbitrariness in how they choose to apply the law - particularly in cases where it is suggested that an agent of the State has broken the law.

Think about that for a moment.

You believe that you have reasonable grounds to believe that an agent of the government has, oh, perhaps tortured a terrorist suspect.

This ruling basically says you are entitled to file that information, and to present it to a Justice for process without the Crown being entitled to summarily interfere and dismiss the information.

Now - it may be the case that upon the charge coming before the Court, the Crown may choose to stay the prosecution - but at that stage, we are in the public eye. And we are before a Judge, who is, in theory, independant of the State.

Certainly, the Crown can stand up and say, "We are staying this charge", but by that point, perhaps, the Press is there, and may have some pointed questions for the government regarding that direction.

An excellent decision, pure and simple.

An excellent decision ... already made by the Supreme Court, and simply confirmed here.

It is the one useful thing Gary McHale has done, though.