More On The News Cycle 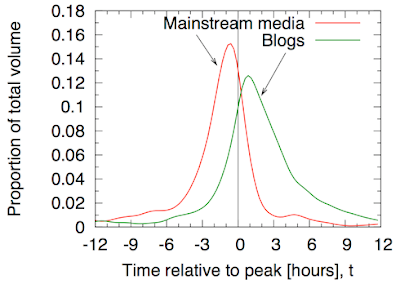 From the Journalism Lab, more commentary on Meme-tracking and the Dynamics of the News Cycle. Here the J-Lab author (Zachary M. Seward) disputes the contention (ascribed to the NY Times but really straight from the paper itself) that blogs follow the MSM (as shown in figure above):
Back to Kleinberg’s idea of the web as a “single organism.” The study found that, yes, memes peak on prominent websites — that is, those indexed by Google News — before less prominent ones, but both of those peaks are generally preceded by a blip on the less prominent sites. Here’s how it’s illustrated in the paper; 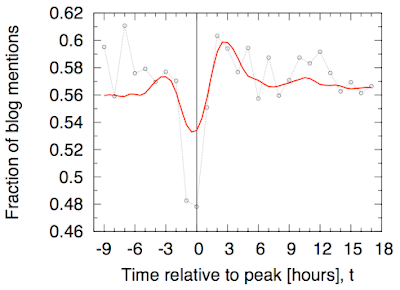 The authors describe this as a “‘heartbeat’-like dynamic” or a series of handoffs between blogs and mainstream media. My hunch is that the heartbeat would be even more visible — healthier, you might say — if the study had made a more-precise distinction between mainstream media and blogs. But in any event, the finding explodes that worn-out notion, furthered by today’s Times piece, of parasitic blogs merely reacting to the work of professional journalists.

This suggests the possibility that news is typically "found" by the blogosphere (the early blip on less prominent sites), and then widecast by the MSM, and then, finally, further chewed over one more time in the blogs. Here's the relevant passage from the paper:

Figure 9 shows a “heartbeat”-like like dynamics where the phrase “oscillates” between blogs and mainstream media. The fraction of blog volume is initially constant, but it turns upward about three hours before the peak as early bloggers mention the phrase. Once the news media joins in, around t = 􀀀1, the fraction of blog volume drops sharply; but it then jumps up after t = 0 once the news media begins dropping the thread and blogs continue adopting it...

The question I have: do the early media reports typically precede or follow the early blog reports?

Another thing I've noticed is that the original paper's discussion of the 3.5% of stories in which the MSM appears to follow the blogs (in the top graph, the green line would peak 1s in such cases) is a bit obscure. The paper's table 2 give several examples, one of which is:

Well uh you know I think that whether you’re looking at it from a theological perspective or uh a scientific perspective uh answering that question with specificity uh you know is uh above my pay grade.

This is a response from now-President Obama to a question posed by him in an interview with Rick Warren. But it does not appear to me to show a piece of news discovered in the blogosphere, and then launched into the MSM. Rather, the interview was quite heavily covered in the MSM (at least as I remember it), which is where the original phrase would have appeared. It was the percieved inadequacy of Obama's response that got batted about the blogosphere, and was then recirculated through the major news outlets.

So it doesn't answer the (to me) important question: how much primary news are bloggers getting to 1st (in which direction does the 1st handoff go--from blogs to MSM or MSM to blogs)?

Posted by bigcitylib at 5:54 AM

Thanks for writing about this, M.J. One of the crucial things about this study is what you identify at the end of your post: We're not really talking about shoe-leather reporting on the part of anyone, blogs or mainstream media. These memes are almost entirely quotes from the candidates that were delivered in public and "discovered" by no one. Some news outlets merely took notice of them first.

I don't think that's a flaw with the study — the authors are pretty clear about what they're looking at — but it's certainly reason to avoid sweeping generalizations about the value of MSM reporting, contributions of blogs, and that kind of thing. —Zach Seward

PARASITIC SPECIES INFESTATION alien robot telescope spaceship: audiobook getting things done (GTD is the tag), the first few tracks of PALE BLUE DOT are good, as we transition to a knowledge based global society

MIT OCW designing your life. The art of war flashcard deck, wikipedia article audio book the 48 laws of power... RAW stem cells movies: Eagle EYE, Minority Report, (gps and audio recording + all video survelance to DVR on web for all probation and parole ankle monitors, put more people on them and use software to monitor them, the probation or parolee pays for the ankle monitor and then gives it back to the probation office then the next probation pays for it again, thus buying another one) broadcom is makeing new version of these chips every two months now GPS + Bluetooth + WiFi + FM combo chip)
audio + video security DVR in juvinile prisons with audiobooks streaming leave the headphones you buy behind for the next inmate