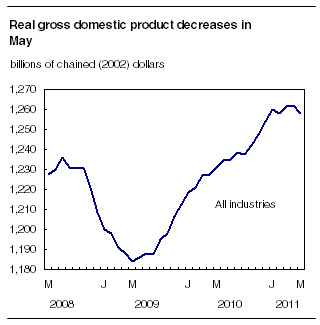 Crap GDP numbers for May make the Bank of Canada's 2nd Quarter 1.5 per cent growth figure very difficult to achieve.  Crap numbers from the US, and the antics of tea-partiers in Congress, make more crap numbers likely in the near future, suggest that any "re-acceleration" of growth in the second half of 2011 is going to be pretty subdued.
You know, in politics, timing is everything.  Whose idea was it to call an election when things were looking good for the gov., rather than waiting for the economy to soften and then blast them for that every day?

This is a temporary blip. Always hazardous to go on one month's data. Far more important to people in these unsettled economic times is Canada's AAA credit rating which has been reaffirmed.

I think that Harper ( no economist), won't do a thing,
How could we have a triple A, credit when the deficit is high?
I think he should have listened to Ralph Goodale, when he suggested Harper to open the Finance committee, and to talk about what they are to do, if something happens in the States, in other words, contingency plans and Harper did nothing but scoff!

It really bad,but you can get dress pant in very affordable price.

Double dip.
@A Eliz "How could we have a triple A, credit when the deficit is high?"
These are the same fools who rated the toxic CDO's as worth face value - no risk.
One question about the recent "crisis" with the US about to default - which Hedge Funds went long on the dollar and T-Bills to make a big profit on an artificial crisis? Watch the dollar bounce back this week, then plunge again.